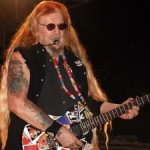 On Thursday (4-27-11) a judge in Iowa ruled that 71-year-old David Allan Coe could continue a lawsuit that stems from an incident in June 2008 at the Prairie Meadows Racetrack and Casino in Altoona, Iowa, that resulted in Coe being arrested. Coe had been gambling with his girlfriend, now wife, and not performing. The altercation happened after Coe hit the jackpot on a slot machine. There was confusion as security guards gave him orders that he did not comply with because, as he states, he couldn’t understand them because of hearing loss. The situation escalated until Coe was tackled by two sheriff’s, detained, and eventually jailed briefly.

Charges of “Disorderly Conduct” and “Interference with Official Acts” were dropped against Coe in 2008, but he took out a lawsuit in 2010 against numerous parties for “False Arrest”, “Assault”, “Malicious Persecution”, and “Intentional Infliction of Emotional Distress” according to the Des Moines Register. The reason for Thursday’s court date was because Coe and his attorney had neglected numerous requests for information from the defendants in the case. Coe says he’s “not a computer person”, is often on the road, and only checks his post office box “once every three months or so”. Coe also says the result of the altercation is that he now has to walk with a cane, and sit down to perform; limitations he did not have to deal with before.

Judge Robert Blink on Thursday ruled that Coe must pay some of the defendants legal expenses incurred by not responding to their requests, but said his lawsuit could continue, though he also told Coe, “I think you’re going to have to have some way to make yourself more available to counsel. Otherwise, frankly, this suit is going to falter.” No court date has been set yet for Coe’s lawsuit.

David Allan Coe spoke to a reporter after leaving court on Thursday.