Davy Jay Sparrow from Bloomington, Indiana is not a neo-traditionalist, he’s an ultra-traditionalist. If you don’t like the “Olde Fashioned” country sounds, then turn back now. If you do, the tunes that Davy and His Well Known Famous Drovers throw down on this album are good enough to be considered right beside BR549, Wayne Hancock, and the other overlords of country’s old sounds.

Western swing is the foundation of Davy Jay’s tunes, but they have a jazzy, up-tempo boogie and fun factor that allows the music to rise above your average Western swing fare. The first time I was exposed to Davy Jay & The Drovers was at the 2011 Muddy Roots Festival, where Davy’s very young son and fellow Drover “Railroad” Jack Sparrow introduced him on stage and then revered the crowd with jokes throughout the set. 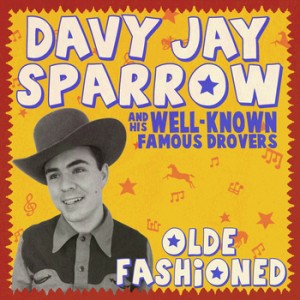 This album is just so refreshing. It’s refreshing for Western swing and for a neo-traditionalist album because it’s just so fun. This may be the most fun album I have heard in years. It’s not afraid to be spontaneous and whimsical. There’s a comic book element to it, and a Golden-Era silver screen dime store novel romanticism, yet in never crosses the line of being corny or cornpone. If anything, it’s “cool” in the traditional sense of the term. It’s like The Slow Poisoner meets The Stray Cats. With the funny names and cheese-colored cover, you may expect cheesiness, but it solves any of those concerns by being wonderfully structured and very astutely written, arranged, and performed.

The musicianship, and the variety of instrumentation and the skill displayed here is what will makes Olde Fashioned feel anything but outmoded. The way you have no idea what sound is coming at you next peppers this album with a tremendous amount of spice. Excellent trumpet parts, harmonica, and steel guitar, and the use of tempo is masterful. The fast songs are very fast, and the slow ones very slow, and the mid tempo is only called on to clean the palette for the next fast or slow song. This keeps you brain guessing and anticipating, and engaged with the music.

And this is an album for all ages. From the cover to the content, this would make a great kids record, yet in no way is it intended to be. Sparrow slips in some innuendo here and there strictly for the adult audience, in fact sexual innuendo is a pretty important element to the music. Young “Railroad” Jack Sparrow (Davy’s son) plays a really important role too, and that’s no joke. His presence here and there on certain songs really sets this work apart, and was a wise move on Davy’s part. “Railroad” Jack creates this class no grown-up could, like the kick-ass female bass player in a garage band that legitimizes the whole thing.

Davy’s Bob Wills-style hollering is just about perfect, and forget that he isn’t really a full-time touring musician or that he’s never been under the tutelage of Ray Benson or something, strip back all the imagery and this is a serious, top-shelf Western swing album, and I can’t see why it should be mentioned right beside Asleep At The Wheel or anybody else as some of the best Western swing music out there today. Western swing has fallen so far behind its other country sub-genres like bluegrass because of a reluctance to have fun with it just like Davy Jay Sparrow is doing right here. Quit your day job Davy, Western swing needs you!