No ladies and gentlemen, Western Swing is not dead; not when Davy Jay Sparrow is on the job, doing his level best to keep the distinguished country music sub-genre fresh and fun by forging ahead with his fast-paced and frolicking take on one of country music’s original modes. 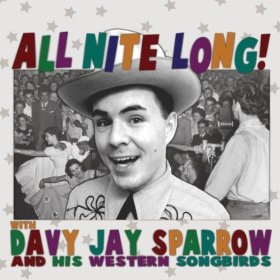 Since Sparrow released his last album Olde Fashioned, he’s migrated west from Indiana to Portland, OR and traded in his “Well Known Famous Drovers” for a gaggle of “Western Songbirds”. Together they have released a stellar and entertaining album called All Nite Long complete with dancing horn sections, Sparrow’s spellbinding vocal acrobatics, 11 all new original songs, and two delicious traditionals. Put it all together and you have one of the most entertaining albums released so far in 2013.

What makes Davy Jay Sparrow so special is the way he revives the showmanship aspect of Western Swing. As the music style evolved from its pioneers like Bob Wills & His Texas Playboys, the Light Crust Doughboys, and Hank Thompson, it had to lose some of what many would consider its hokey nature to stay relevant, resulting in more modern acts like the Western Swing mainstay, Ray Benson’s Asleep At The Wheel. But since Western Swing was formed during the golden era of entertainment, you could make the case that the showmanship is an essential element that makes Western Swing work.

To counteract the Howdy Doody hokey nature of the music, Davy Jay Sparrow sends all the showmanship elements into hyper drive, showcasing the Bob Wills calls, the yodels, and the overall entertainment focus of the music in such a charming way, you can’t help but get sucked in. The result is music that is both intellectually stimulating and challenging from its complexity and the talent that the music brandishes, while still being so entertaining and accessible, you could swap this for your kid’s Disney records and they’d thank you for it.

The presence of a keenly-talented horn section is what really propels All Nite Long! over the top, and allows Davy Jay Sparrow to touch on elements of jazz and ragtime, giving the album incredible spice. Everything about All Nite Long! is crisp. Even in the mid tempo and slow songs, there’s this underlying energy and eternal smile to the music, even in their excellent cover of “My Bucket’s Got A Hole In It” that keeps you laying on the repeat button. Sparrow’s yodeling, calling, and general vocal dexterity that is seamlessly worked into his studious songwriting is also what propels Davy Jay Sparrow and His Western Songbirds to the point of superlative distinction.

Not for everyone of course, you have to be an old soul with that old-school flavor for life to appreciate what Davy Jay is throwing your way. But man, what a fun time All Nite Long! is.