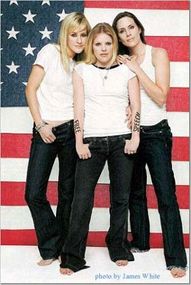 Ten years ago today, Natalie Maines of the Dixie Chicks stood in front of a crowd at Shepherd’s Bush Empire Theatre in England, and uttered these now infamous words:

“Just so you know, we’re on the good side with y’all. We do not want this war, this violence, and we’re ashamed that the President of the United States is from Texas.”

Despite numerous clarifications and apologies from Natalie Maines and the Dixie Chicks, a full on boycott of their music was called for by pro-Bush, pro-war, and pro-American groups. Their single “Landslide” went from #10 on the Billboard charts, to #44 in 1 week, and the next week fell off the charts completely. Radio stations who played any Dixie Chicks songs were immediately bombarded with phone calls and emails blasting the station and threats of boycotts if they continued. Even radio DJ’s and programmers who sympathized with the Dixie Chicks were forced to stop playing them from the simple logistics nightmare the boycott created. Some DJ’s who played the Dixie Chicks were fired.

Dixie Chicks CD’s were rounded up, and in one famous incident were run over by a bulldozer. Concerts were canceled in the US as the Dixie Chicks couldn’t sell tickets, and rival concerts were set up that would take Dixie Chicks tickets in exchange. The Dixie Chicks lost their sponsor Lipton, and The Red Cross denied a million dollar endorsement from the band, fearing it would draw the ire of the boycott. The Dixie Chicks also received hundreds of death threats from the incident.

The boycott eventually lead to the virtual demise of the band. They went on hiatus in 2008, though their bounce back album in 2006 produced by Rick Rubin called Taking The Long Way went gold in its first week, debuting at #1 on the Billboard country charts despite absolutely no radio play.

Perspective on the Demise of the Dixie Chicks 10 Years After

Whether anyone wants to look at what the Dixie Chicks comments as right, wrong, poorly timed, or misplaced being said on foreign soil, it is hard to not see 10 years after the hypocrisy of how the Dixie Chicks were handled by the country music community. At the same time Natalie Maines made her comments, Willie Nelson was also openly criticizing the war, but taking it to another level by floating the idea that 9/11 was a potential governmental conspiracy perpetuated by the Bush Administration to drum up public support for war in Iraq. Merle Haggard released an anti-war song in the summer of 2003 called “America First” with little to no backlash. And then there is the idea that whether you agree with Natalie Maines or not, her right to speak her mind is guaranteed by The First Amendment, one of the things President George W. Bush pointed out himself when responding to the controversy in April 2003: 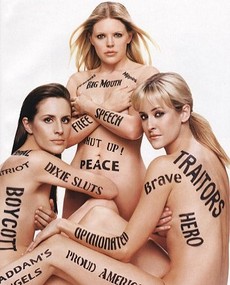 The Dixie Chicks are free to speak their mind. They can say what they want to say…They shouldn’t have their feelings hurt just because some people don’t want to buy their records when they speak out. Freedom is a two-way street. I don’t really care what the Dixie Chicks said. I want to do what I think is right for the American people, and if some singers or Hollywood stars feel like speaking out, that’s fine. That’s the great thing about America. It stands in stark contrast to Iraq.

As President Bush points out, the people boycotting the Dixie Chicks were also exercising their rights to freedom of speech. The controversy also created positive sentiment and appeal for The Dixie Chicks that it wasn’t there before. Their album Taking The Long Way won 2007 Grammy Awards for Album of the Year, Record of the Year, and Song of the Year; something that was likely not possible without the sentimental vote by the greater recording industry. Outlets like NPR who would have never touched the Dixie Chicks’ music before the boycott began playing them in regular rotation. Taking The Long Way went 5 times platinum eventually, partially on the support of people who sympathized with the Dixie Chicks politically.

How The Death of the Dixie Chicks Changed The Music

Meanwhile the opposition to the Dixie Chicks and the person at the opposite end of the political and sonic spectrum was Oklahoma’s Toby Keith. He symbolized the loud, electric, arena rock approach to country music that could be argued is still heavily in place in country music today. Toby positioned himself as the antithesis of the Dixie Chicks, and ended up becoming the best-selling artist in country in the 2000’s decade. Toby’s flashy, rock-style arena show thrived while the Dixie Chicks’ stripped down, acoustic approach dwindled back into obscurity in mainstream country. When you see bands today like Mumford & Sons, The Lumineers, and The Avett Brothers, you see that the stripped-down, acoustic approach to music is still relevant, if not the most relevant approach today in popular music. But it’s had to move outside of the country music fold to find a present-day outlet.

Reflecting back on the Dixie Chicks and the public fallout, it is hard to not see that the country music community’s reaction was unmeasured, unfair, and overall, unhealthy for its future. Country music not only black balled a band that was offering sonic leadership to the genre on how to move forward while still respecting the roots of the music and remaining commercially viable, they lost one of the genre’s greatest economic engines, and may have long-term fumbled their ability to benefit from the universally-relevant appeal of acoustic roots music.

But most unfortunately, the event leaves country music with a black eye as a genre who can’t respect artists regardless of their beliefs. This typecasting of the country music fan as a closed-minded, politically-intolerant animal is a legacy it will take country music a long time to shake. Much longer than 10 years.