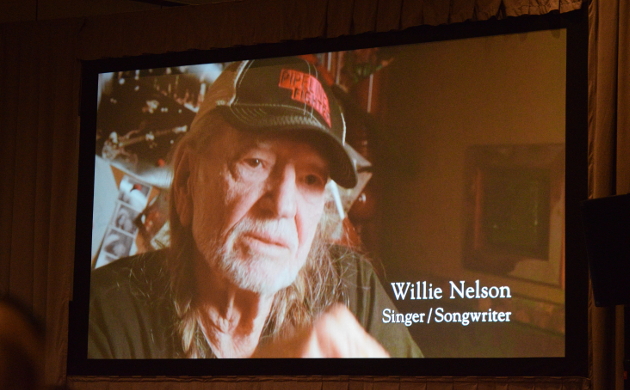 America’s premier film documentarian Ken Burns has been working on an expansive film about country music over the last half decade, and as part of this week’s AmericanaFest in Nashville, new details were revealed about the project. Ken’s primary collaborator and the screenwriter for the film Dayton Duncan spoke to an assembled crowd Thursday (9/13) about what country music fans can expect, and the scope the film takes.

Encompassing over 16 hours across eight separate episodes, the film will include footage from 56 separate interviews with artists and historians, including interviews with 40 Country Music Hall of Famers, and a few artists who have passed away since film production was commenced. Some of the principal commentators include Marty Stuart, who Dayton Duncan called the “Human avatar thread in our tapestry,” Willie Nelson, Rodney Crowell, Rosanne Cash, Emmylou Harris, Kris Kristofferson, and Ray Benson. The film also includes ample archive footage, including from the iconic film “Heartworn Highways,” footage from country music variety shows, and other archive material.

Over 500 songs are featured throughout the film, from small snippets to full performances. The film starts all the way back in 1923 with Fiddlin’ John Carson who began performing at an Atlanta radio station and became a star, to roughly 1996 with the death of Bill Monroe, and the revitalization of Johnny Cash’s career via his work with Rick Rubin and his American Recordings projects. In between, the story of country music is told, but as Dayton Duncan explained, the film is not an encyclopedia of country music. They are storytellers, following country music’s history via artists, songs, and moments that went on to shape the music.

There is an episode specific to Texas music (Episode 7), which is the only episode that stretched over 2 hours, clocking in at 2 hours and 16 minutes. As part of the presentation at AmericanaFest, four clips from the film were played, including a clip from the Texas episode with Rodney Crowell crediting Texas for being such a hotbed for country music to, “We’re the best liars in the world.”

Dayton Duncan explained that the film is essentially done, with only sound effects and final editing to be finished. They’re also working on releasing a soundtrack for the film, as well as a companion book that will include information from the over 175 hours of interviews that didn’t make it into the film. Peter Coyote—who has narrated multiple Ken Burns films—returns to work on the country music project.

The film is expected to premier on PBS in September of 2019.