As first reported by Saving Country Music in June of 2017, the heavy metal band DevilDriver has been working on an Outlaw country tribute record that will include special guests and a heavy metal influence on Outlaw country. Now we have the details on the project called Outlaws ‘Til The End, including the track list and roster of collaborators ahead of the July 6th release via Napalm Records.

From the country world, Hank Williams III, John Carter Cash, and Ana Christina (Cash) will participate in the project, as will metal and punk luminaries such as Lamb of God’s Randy Blythe, Lee Ving of Fear, Wednesday13, Brock Lindow of 36 Crazyfists, and Burton C. Bell of Fear Factory. Songs covered include “Whiskey River,” “I’m the Only Hell (Mama Ever Raised),” “The Man Comes Around,” “A Thousand Miles From Nowhere,” “Copperhead Road,” “The Ride,” and the tribute album starts off with a cover of Hank3’s “Country Heroes” with Hank3 guesting on the track (see the full track list below).

“It was fun trying to use a few different voices for the vocal track on ‘Country Heroes,'” Hank3 says. “I was very impressed with [DevilDriver’s] approach on covering the song.”

Though Rolling Stone posted the misleading headline that Hank3 was doing a collaborative record with DevilDriver, he only appears on the one song. DevilDriver is the band for all the tracks, with certain vocal guests collaborating on some songs. 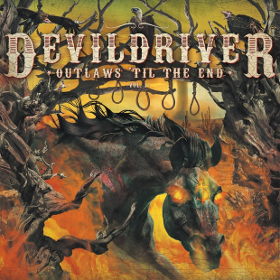 “I’ve known Hank3 for almost 20 years – in my opinion, he’s one of the true outlaw country artists out there right now going against the grain with all he does, much like his grandfather and father have done in their careers,” says Dez Fafara of DevilDriver.

“If you go to a metal concert you hear country. So the guys outside my bus that are sitting there having a barbecue before the show, I’m listening to them and they are listening to everything from Black Sabbath to Johnny Cash,” said Dez Fafara. “It’s just a very natural progression. If you go on any tour bus in the United States, a metal tour bus, you are definitely going to hear outlaw country … There is some kind of form of respect that artists that did their thing that weren’t pop country, that did their thing in their own time and branded themselves as heavy artists. Just like heavy metal, blues and punk rock is very underground, those outlaw artists were very underground as well. So there is a very good mutual form of respect there.”

Outlaws ‘Til The End is now available for pre-order. It is the first volume in what DevilDriver hopes is multiple releases behind the concept.

6. “If Drinking Don’t Kill Me (Her Memory Will)”
Written by Harlan Sanders, Rick Beresford; recorded by George Jones
Performed by Wednesday13 & Dez Fafara

7. “The Man Comes Around”
Written by Johnny Cash
Performed by Lee Ving of Fear & Dez Fafara