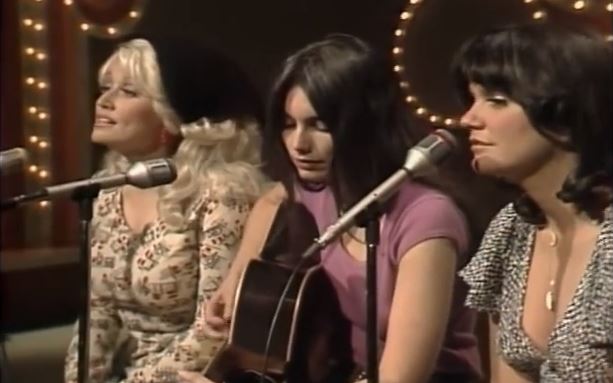 When talking about country music supergroups, often the discussion immediately veers toward The Highwaymen—Johnny Cash, Willie Nelson, Waylon Jennings, and Kris Kristofferson. But right behind them better be mention of Dolly Parton, Emmylou Harris, and Linda Ronstadt, whose 1987 record Trio is considered one of the crowning achievements in country music history. Just like The Highwaymen, it wasn’t only about the star power assembled, but the way these three iconic voices of country music combined together selflessly that made one sound greater than the sum of their parts, and hairs on the back of the neck stand on end.

Dolly Parton, Emmylou Harris, and Linda Ronstadt have all received individual distinctions aplenty over the years, with both Dolly and Emmylou being members of the Country Music Hall of Fame, and Ronstadt a member of the Rock and Roll Hall of Fame. Dolly Parton has also been bestowed a star on the Hollywood Walk of Fame previously. But now all three of these important and iconic country music women will be honored together with their own Hollywood Walk of Fame star.

Along with Robert De Niro, Guillermo del Toro, Anne Hathaway, fellow country artist Faith Hill, and others, it was announced Tuesday (6/26) that the Trio will be part of the 2019 Hollywood Walk of Fame class. In typical Dolly Parton fashion, she celebrated the news with a boob joke. “I am so excited that I have a star on the Hollywood Walk of Fame, but with two of my best friends … That’s natural. I like to do things in pairs, if you know what I mean.”

The honor holds special distinction for Linda Ronstadt who retired in 2011, and revealed in 2012 that she had been diagnosed with Parkinson’s Disease, rendering her unable to sing. Though the contributions to country music by Dolly Parton and Emmylou Harris are well-noted, Ronstadt’s often go overlooked. In 1974 she was awarded Best New Female artist by the ACM Awards, and landed Top 5 country hits with “Blue Bayou,” “When Will I Be Loved,” “I Never Will Marry,” and others.

The Trio album won the ACM for Album of the Year in 1987, and the CMA’s Vocal Event of the Year in 1988. It was Certified Platinum by the RIAA, and was succeeded by the Gold-Certified Trio II in 1999. The Complete Trio Collection combining all of the supergroup’s work including rare takes was released in 2016.

Also fitting the trio would be recognized in Hollywood. Both Emmylou Harris and Linda Ronstadt were seminal to the expansion of the California country sound in the early and mid 70’s. During the 70’s is when the trio first began performing and collaborating together, occasionally appearing on each other’s albums. But due to scheduling conflicts, it would take another decade for a proper album to be recorded and released.