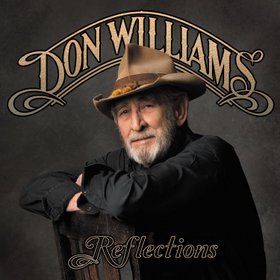 For eight lonely years in the oughts we traversed the long, dark gulf between Don Williams releases, when country music’s “Gentle Giant” retired to his farm to live the same warm, reflective life referenced in many of his songs with such soothing presence. A Don Williams song is like being young again and wrapped in the loving, reassuring arms of a grandparent. Sure, there’s a few other country music artists that can play songs in the mid tempo and sing so quietly to where their voice is as delicate as the sides of a soap bubble. But nobody can do it while being as cool as Don Williams.

After releasing And So It Goes through Sugar Hill records in 2012, Don Williams has all of a sudden become downright prolific in the new decade, and his latest release Reflections is due out on Sugar Hill March 11th. Ahead of the release Don teases us with a new song, an adaptation of Texas songwriting legend Townes Van Zandt’s beautiful, disarming tune of love triumphing over freedom, “I’ll Be Here In The Morning.”

Released on Van Zandt’s first official studio record, 1968’s For The Sake Of The Song, “I’ll Be Here In The Morning” was counter to the popular “Ramblin’ Man” notions prevailing at the time in music with male musical characters issuing warnings to their lovers to not expect them to be around for long. The poetic ear the young Van Zandt displays in the song is highly worthy of recognition, even if the theme wasn’t popular or resonant in 1968. However “I’ll Be Here In The Morning,” just like Townes and Don Williams, proved to be timeless.

Recorded live (as can be seen below in the video), Don’s version does what Don Williams does, which is approach a song with such a gentle touch, it revives memory like the sunlight and the feel of the air at the change of seasons. Tasteful instrumentation, including light entrances by banjo, steel guitar, and harmonica embellish the recording, while a two-tone Waylon-esque bass beat drives the song and lead electric guitar indicative of a Mark Knopfler style, and classical acoustic guitar offer a break to Don’s effortless, caramel-swirled vocal tones, holding the words of Van Zandt’s work like a proud father holds his child for the first time.

You can also listen to another new Don Williams song “Talk Is Cheap” on Engine 145.