Dwight Yoakam to Duet with Sam Hunt for ACM Special

Trigger Down with Pop Country 78 Comments 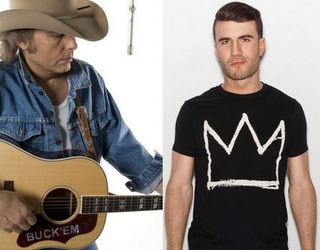 In the latest sign that a godless Apocalypse is nigh upon us and will reduce the entire effort of humankind from the beginning of time to an infinitesimal blip of virtual nothingness perpetuated in a faraway corner of the universe, Dwight Yoakam has agreed to pair up with country music sham artist Sam Hunt for a duet as part of an ACM Awards television special. The news was reported in this week’s issue of Country Aircheck, that for most readers was quickly reduced to a nappy, unreadable paper mess as they involuntarily emptied their entire upper gastrointestinal systems in a most violent convulsive movement at the sheer thought of such an unrelentingly evil thing transpiring.

The duet will happen in conjunction with the Academy of Country Music Awards, or ACM’s set for Sunday, April 19th. Every year the ACM’s take advantage of the assembled star power for the awards themselves to tape a television special based around a specific theme to be broadcast at a later date. Over the last couple of years, they featured a tribute to the troops and to Lionel Ritchie. As part of the ACM’s 50th Anniversary, they have decided to feature a duet special pairing up current stars and past greats, including Dwight Yoakam with Sam Hunt.

Other duet partners include Miranda Lambert and Patty Loveless, Keith Urban with John Anderson, and The Band Perry with Deana Carter. The concert will happen at the Texas Rangers baseball park, just down the street from the Dallas Cowboys stadium where the 50th annual awards will be held to a crowd of 70,000. The duets will be part of a “Party for a Cause” festival at the baseball park.

About the only solace Dwight Yoakam fans and traditional country fans can take in this development is that Dwight probably is perfectly ignorant to who Sam Hunt is and signed up simply because he was asked, similarly to how Sam Hunt’s fans are perfectly ignorant of who Dwight is. The sad thing about the duet concept is it is actually a good way to showcase older country artists—something these award show organizations struggle with regularly. It’s similarly sad that Sam Hunt, who spent the early part of his career actually writing okay songs and showing some promise, will probably follow Dwight’s lead and the duet won’t be as terrible as it seems on paper.

Nonetheless, it is a definite sign that Satan is alive on earth and is looking to subjugate us all into audio slavitude for our country music sins.