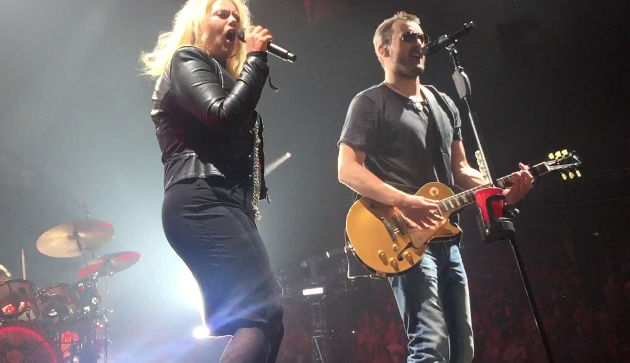 It’s almost becoming an annual tradition for Eric Church: Show up to a country music awards show, and share the mic and the moment with a woman that the rest of us need to know about. In 2018 at the 52nd Annual CMA Awards, it was a familiar face to many of Eric Church’s most devoted fans, but a new face to much of America. Her name was Joanna Cotten.

The moment almost didn’t happen. Eric Church was not initially scheduled to perform at the 2018 CMA Awards. Since his most recent album Desperate Man was not released until October, it wasn’t eligible for the 2018 CMA Awards. So you might as well duck out for a year, and save your powder for 2019. But after Kenny Chesney canceled last minute due to a death in the family, Eric Church was called to fill in, and Church, wanting to continue his tradition, turned to a familiar face to be the woman everyone would be asking, “Wow, who was that?”

Joanna Cotton is a member for Eric Church’s backing band, but her story goes much deeper than that. Born in Memphis, Tennessee, and raised in Arkansas, she was once signed to Warner Bros. Records, and recorded over 20 songs for a debut album that was never released. When a single called “The Prize” stalled out at #60 on the Billboard Hot Country Songs chart in 2007, her music was shelved by Warner Bros., and so was her career, as is so often the case in the major label business.

But Cotten continued to record and tour, and developed a sound she calls “Funkabilly,”—a mix of blues, funk, and country that is very indicative of her Memphis roots. She’s a singer with passion. “I have to sing for people, that’s just the way it is,” she says. “It’s like a beast inside of me that has to come out, and it’s been that way since I was a baby girl.”

Joanna Cotten attended the prestigious Juilliard Music School, and afterwards moved to Nashville where she would regularly perform at places such as 3rd and Lindsley, eventually getting singed by EMI Music on a publishing deal, and later to Warner. But after five years of waiting for the label to do something with the material she recorded for them, she decided to move on. When Eric Church was looking for a soulful voice for his band, Joanna Cotten signed up. She first appeared prominently with Eric Church in a live video for Church’s song “Over When It’s Over” in 2013. In 2017 when Eric Church performed “Chattanooga Lucy” on the CMA Awards, this was Cotten’s first brush with national television exposure.

“I wrote my CMA female vocalist of the year acceptance speech when I was 9 years old,” Cotton said last year after the CMAs. “I’ve wanted to stand on that stage and sing my entire life and this year I got to do just that. It was such an amazing experience and dream come true for me. I am so grateful to Eric Church for allowing me the opportunity to live my dream and for all the encouraging words from my friends and the fans. What a night for the record books in my life!”

Once again in 2018, Eric Church’s current single “Desperate Man” bestowed the opportunity for Joanna Cotten to drift from the backline to the frontline, and wow viewers.

Eric Church may not be the guy you would expect to be a big champion of country music’s women on the surface. Of the mainstream lot, his reputation has been built on being the hard-nosed rebel who does things his own way, even if some of this is more akin to marketing than the way Church actually manages his daily business. But quietly, Church has become a big champion of many of country music’s most deserving women who in the near term have been struggling for any attention at all, with the success and opportunities bestowed to Ashley McBryde recently being one of the best examples. McBryde owes much of her current success to Church, and just like Joanna Cotten, had been working for years in the music business before Church came along.

Eric Church also collaborated with roots music stalwart and Carolina Chocolate Drops founder Rhiannon Giddens on his single “Kill A Word.” The collaboration gave Giddens the opportunity at a bigger national audience, a nice little payday in royalties, and an important performance slot on the 50th annual CMA Awards in 2016. Church also bestowed a similar opportunity to the critically-acclaimed Valerie June when he needed a duet partner to perform his song “Like Jesus Does” at the 2013 ACM Awards. Unannounced, June appeared on stage for the stripped-down, acoustic performance, wearing a long red dress and buzzing the internet as folks scrambled to try and find out who she was.

Church also featured Lzze Hale of the rock band Halestrom on his song “That’s Damn Rock & Roll.” Needing someone to sing on songs like “That’s Damn Rock & Roll” and others in concert is the reason Church went searching for a permanent backup singer in his band, and led him to Joanna Cotten. But the CMA Awards moments haven’t been about Joanna Cotten singing backup. It’s been about putting her front and center in front of a national audience on country music’s biggest night. And of course it would not mean anything unless Cotten delivered and impressed, which she has. The soul and energy she’s brought has sent social media buzzing, and sent many searching for her name.

The CMA Awards may be the first time many have heard of Joanna Cotten. But don’t bet it will be the last.