Eric Church Wants It Both Ways 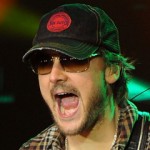 It’s become American Idol gone mad. Honestly, if Blake Shelton and Cee Lo Green fucking turn around in a red chair, you get a deal? That’s crazy. I don’t know what would make an artist do that. You’re not an artist…If I was concerned about my legacy, there’s no fucking way I would ever sit there [and be a reality-show judge]. Once your career becomes something other than the music, then that’s what it is. I’ll never make that mistake. I don’t care if I fucking starve.

Then Eric Church turned his evil eye veiled behind his signature aviators on the current state of the institution of rock n’ roll.

Rock & Roll has been very emo or whatever the fuck. It’s very hipster. We played Lollapalooza and I was stunned at how pussy 90 percent of those bands were. Nobody’s loud. It’s all very fuckin’ Peter, Paul and Mary shit.

On the surface, what Eric Church said about Blake Shelton and “The Voice” is spot on. The problem is that Eric Church, whose very much a product of the same machine Blake Shelton originates from, is the one throwing the punches. Eric Church is on tour right now with the official country music douche Brantley Gilbert for crying out loud. He wants to be considered an “Outlaw”, but he takes every opportunity to be part of the big corporate country music machine by performing at award shows. If Eric Church has such a problem with Blake Shelton, why did he perform his song “Springsteen” at last month’s ACM Awards, that were hosted by, guess who… Blake Shelton.

As Blake’s wife Miranda Lambert pointed out through Twitter, she took Eric out on tour with her in 2010. “Thanks Eric Church for saying I’m not a real artist,” she tweeted. “You’re welcome for the tour in 2010.”

Erich Church wants it both ways. He wants to be considered the “new Outlaw” of country music, but he wants to still use the same pop country machine he criticizes to get success. And when exactly did calling out other performers make you an Outlaw? I sure don’t remember Willie or Waylon doing that in their Outlaw days. I remember Waylon skipping the award shows, not making self-aggrandizing videos to help drum up votes from fans. And if you can’t do anything but play music to be an artist, does that mean Outlaws Willie Nelson and Kris Kristofferson are disqualified because they acted in movies?

This is the same thing Eric Church has been doing for years. The difference now though is Eric Church is no longer playing a club circuit or even a theater circuit. He’s selling out arenas. He’s a bona fide top tier country music star. I am amazed that his last album Chief released last July is still #4 on the Billboard country charts, and was the greatest gainer last week, helped by his big hit “Springsteen.”

But bad habits die hard, and he’s still acting like he has to insult people to get noticed. So many people have their conspiracy theories of how Taylor Swift came to power in country, floating stories about her dad buying her career, and warehouses full of CD’s purchase to drive SoundScan numbers to get her album in the charts. But in truth her big break came when Eric was on tour with Rascal Flatts. Yeah, again, not very “Outlaw”. After repeatedly ignoring Flatts’ requests to not play as loud and to respect the time slot they had given him, since after all, they were giving Eric Church an opportunity, he got kicked off the tour, opening up a space for the up-and-coming Taylor Swift to benefit from the exposure.

Lastly, this Rolling Stone article should be taken with a little suspicion. The financially-struggling outlet has a history of taking comments out of context, printing comments that were meant to be off-record, and at times publishing outright fictitious stories to help drive buzz and viral events, just like with what has happened with this story where everywhere you turn, people are talking about it. For example there was the story pitting Kris Kristofferson against Toby Keith that both sides say is completely fictitious, or the article that got Gen. Stanley McChrystal fired. Don’t be surprised if Eric in the coming days comes out and says that his comments were misconstrued in one way or another.

As I anticipated, Eric Church has released a statement through The Boot, saying his comments in The Rolling Stone were “misunderstood.”

“The comment I made to Rolling Stone was part of a larger commentary on these types of reality television shows and the perception they create, not the artists involved with the shows themselves,” Eric clarifies. “The shows make it appear that artists can shortcut their way to success. There are a lot of artists due to their own perseverance that have gone on to be successful after appearing on these shows, but the real obstacles come after the cameras stop rolling. Every artist has to follow up television appearances with dedication towards their craft, but these shows tend to gloss over that part and make it seem like you can be ordained into stardom. I have a problem with those perceived shortcuts, not just in the music industry. Many people have come to think they can just wake up and have things handed to them.

“This piece was never intended to tear down any individual, and I apologize to anybody I offended in trying to shed light on this issue.