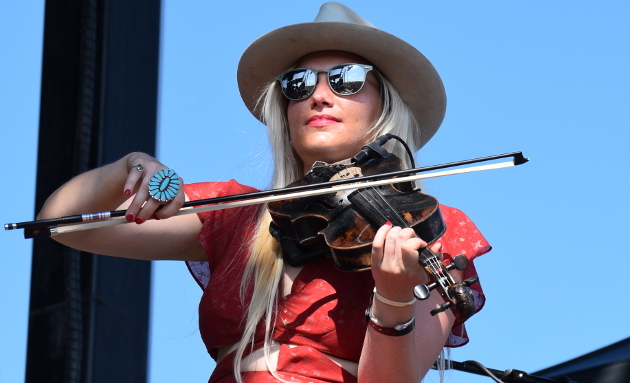 Fiddle player and high-profile member of the fast rising Texas country band Flatland Cavalry is leaving the band effective immediately. Her last show with the band was on July 28th at the Ward County Arena as part of the Butterfield Bull Rides in Monahans, TX. She addressed the departure on social media on Monday (7/30).

“On Saturday, I played my last show as the fiddler for Flatland Cavalry in Monahans, TX. Being a musician is an incredible joy. One of the best parts about being on the road is meeting fans of the fiddle, especially the young ones who are inspired to pick up the bow. I am spending some time in the Hill Country and looking forward to pursuing my next endeavor in the music industry in my sequins and fringe.”

She also posted a quote attributed to Tom Petty, “Music is probably the only real magic I have encountered in my life. There’s not some trick involved with it. It’s pure and it’s real. It moves, it heals, it communicates, and does all these incredible things.”

Laura Jane was an important personality to Flatland Cavalry, and the Texas music scene where women are often too far and few between. Saving Country Music recently referred to her as “…one of the most recognizable names and faces in Texas country.” She was an original member of the band, which released their debut album Humble Folks on April 1st, 2016 to positive reviews and comparisons to the Turnpike Troubadours. The band has recently been seen in the studio working on their followup record.

No word on who may replace Laura Jane on fiddle for Flatland Cavalry, or where she may end up as she heads to the Hill Country. Hopefully she remains a public figure in Texas music.