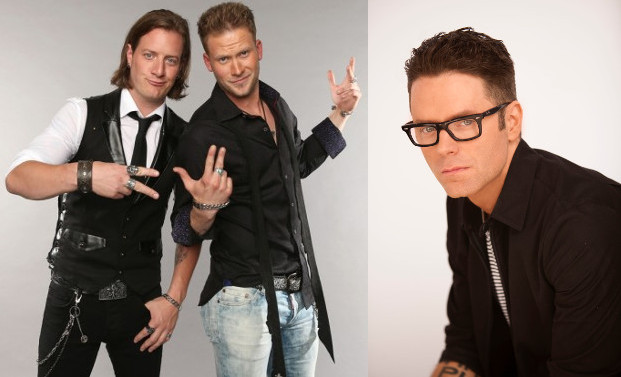 On Tuesday (6-7), Florida Georgia Line stopped by the SiriusXM Music City Theatre in Nashville that sits atop the tower on the Bridgestone Arena for a live acoustic performance. The duo is in town for this week’s CMA Music Fest, and the CMT Awards which will be held at the Bridgestone Arena Wednesday evening. During the performance on on SiriusXM’s pop country station The Highway, the “Go Away Bobby Bones” billboards that Bobby Bones has now admitted to paying for to help create sympathy for himself and his show were inadvertently brought up in a Q&A with SiriusXM DJ Storme Warren.

“You guys have always been in the crosshairs of controversy,” says Storme Warren during the Q&A. “You didn’t bring it on yourselves. Or you did, I don’t know. But people just love firing stuff at you …”

Storme Warren was prefacing a question about Florida Georgia Line’s new single “H.O.L.Y” and how some have called the song blasphemy. But that’s not the direction Tyler Hubbard decided to take it, and instead used the setup to take a dig at Bobby Bones.

“We didn’t put a billboard on the Interstate,” Tyler Hubbard interrupts, as the crowd moans and laughs, slowly realizing that Bobby Bones is the subject of Hubbard’s ire.

“Wow!” says DJ Storme Warren in response. “That was fantastic!”

“I don’t know why I just said that,” Hubbard mumbled before the conversation turned to the controversy surrounding “H.O.L.Y.” The exchange can been seen in the video below, at roughly the 6:50 mark.

In his recent book Bare Bones, Bobby admits that he spent $13,000 on an anti-publicity campaign against himself when he first came to Nashville, paying $2,150 a pop for multiple “Go Away Bobby Bones” billboards.

“Everyone who considered himself a real defender of country music hated me,” Bones says. “My attitude was, ‘This is how it’s going to work. I’m playing whatever I want to play. I’m doing the bits I want to do. I don’t wear cowboy boots or hats or belt buckles. I am not you; I am me … My attitude wasn’t winning me any friends — or listeners. I needed to get people to like me, or at least feel sorry for me … I launched a massive negative PR campaign against myself to garner sympathy.”

The billboards were seen as a shallow move by many of Bobby Bones’ detractors, but apparently even people inside the Music City beltway feel similar. Bones has also apparently been taking playful jabs at Florida Georgia Line on his show recently.

Later Tuesday afternoon, Bobby Bones responded on Twitter, “Guys. I really don’t care what Florida Georgia Line says about me in an interview. I don’t take stuff personally. I respect their music. Keepin it +”

This is not the only beef Bobby Bones has stoked with a performing artist. Bones continues to have an icy relationship with Chris Young, he once got in a strange altercation with Texas country artist Aaron Watson and accused Watson of being disrespectful to women, and Bobby’s bouts with Kacey Musgraves have been well-documented.

Both Bones and Florida Georgia Line are scheduled to appear at Wednesday’s CMT Awards.