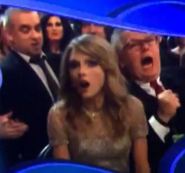 Unfortunately for Taylor Swift, she didn’t walk away with any hardware at the 56th Annual Grammy Awards held on Sunday night (1-26) in Los Angeles, but for the night’s top prize, the coveted Best Album award, Taylor Swift was very, very close. So close in fact when the award winner was announced, it had Taylor Swift and her entourage leaping out of their shorts.

The infamous divided screen that award shows use to put nominees on-the-spot hoping to capture some reaction magic had Taylor Swift in its crosshairs, and when the announcement was read for the Best Album winner, the ‘R’ had Taylor and Co. half way to the ceiling … until they realized that it wasn’t for her latest album Red, it was for the actual winner, Daft Punk’s Random Access Memories.

Swift is actually the most sedated of the crew, with the person sitting to her right looking like he got tazed, and the suit behind her looking like he just had a snake scurry up his pant leg. This is not Taylor Swift’s first time at the rodeo, and despite her initial confusion, the multi-Grammy winner looked gracious in defeat. The guy to the right however seemed to run through the FCC’s dictionary of censored words, as Taylor’s mom (sitting at the far right) gives him an ear full.

So close, Taylor. So close.