The feud between country music Outlaw legend Waylon Jennings and country superstar Garth Brooks has been well-documented and talked about over the years. Though a lot of rumor and conjecture tend to cloud the conversation, we do know that Waylon’s dislike for Garth, who was coming up just as Waylon’s career was hitting a sharp decline, was very real. Whether the quote is real or not that is often attributed to Waylon about a certain type of foreplay and how Garth was the equivalent to pantyhose getting in the way of it, there was undoubtedly some animosity between the two country stars.

During an appearance late last week on Broadway’s Electric Barnyard show on Country 92.5 out of Connecticut, the DJ asked Garth point blank about the feud. One of the reason’s Broadway does such good interviews is because he asks the questions many other DJ’s are too scared to ask. But as opposed to getting angry, the artists usually find the questions refreshing after being asked about the same subjects over and over that only scratch the surface. “You know your stuff, I’m enjoying this,” Garth said to Broadway.

When Broadway asked Garth if he’d ever met Waylon or talked to him about the feud, Garth responded,

No, never met Mr. Jennings. And for some reason man, I guess I was the guy that he targeted. You know, it’s kind of weird because all the people [that are the reason] why I’m in the business, those people say the reason THEY were in the business was Waylon. So everyone loves him, he’s a legend, and I just kind of let it go. I never knew what to say.

Yeah, I was definitely the guy that he targeted (laughing). And it’s funny kinda being the non traditionalist then, and now everyone looks at [me] like, ‘Your stuff is as country as it gets.’ So that’s kind of a weird view. It was tough for me because he was a country legend and for some reason I was the guy that got the brunt of it. I never took it that personal. I just think he was addressing the different sound in country music and the changing of the guard. That’s tough for anybody to handle. The guy’s a legend and deserves nothing but respect.

The artists Garth appears to be referring to as the people who were inspired by Waylon that went on to inspire him would likely be big Garth influences Keith Whitley and Chris LeDoux.

Garth also talked about how his new single is going to be “Mom,” which he calls more traditional than some of the other singles he could pick from his new album. He also talked about up-and-coming performer/songwriter Caitlyn Smith who wrote one of the most critically-acclaimed songs on Garth’s new record, “Tacoma.”

“She’s the bomb. The thing that hurts her in town is that nobody can sing as good as she can. So it’s like, you hear her demos and you want your record to sound like that. But good luck. That girl’s talented.”

The Garth vs. Waylon debate is an ongoing one, and one of those country music discussions people love to take sides on. It will probably continue on as long as both men’s music does, but according to Garth, the feud was one sided. And then there’s the quotes from Waylon’s autobiography: 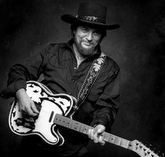 Of course, the next generation better not believe everything they hear. At this point, I’ve been accused of all manner of carousing. Mostly, it’s something that I might have done, or would have done, or couldn’t even imagine doing. Pretty soon it’s etched into stone. If I led the life that people think I did, I’d be a hundred and fifty years old and weigh about forty pounds ”¦

The thing is, we’re in this together, the old, the new, the one-hit wonders and the lifetime achievers, the writers and the session pickers and the guy who sells the T-shirts. The folks that come to the shows, and the ones that stay at home and watch it on TNN. Those who remember Hank Williams, and those who came on board about the time of Mark Chestnut, who named his baby boy after me ”¦

My friends. This town is big enough for the all of us.

Listen to the Garth Brooks interview: