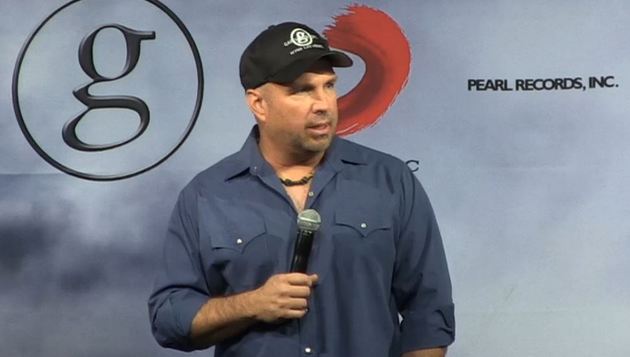 Whether you love or hate the music of Garth Brooks, everyone must bow down and give the Prince of Garthness incredible credit as the most cunning music marketer to ever suck air on planet Earth, and it isn’t even close.

As some of the biggest acts in all of music think they’re making a killing by playing one or two sold-out arena shows per market, Garth shows up to a certain city and scales the amount of shows he’ll play to the demand for tickets. Luke Bryan will play one show in one arena and make X. Garth Brooks will play six shows in that same arena and make X times 6. Oh, and Garth’s fans all pay a quarter of the price because there is no secondary market issue, and everyone gets a ticket who wants one.

Garth doesn’t even announce the cities he’s playing in until it’s time to presale, encouraging some fans to drive from two or three states over to see Garth, even though he may play in their home market six weeks later, when they’ll pay to see him again. As everyone else in the industry is trying to figure out how to keep music money out of the hands of StubHub and scalpers, Garth is running circles around them.

But that’s nothing compared to Garth Brooks the marketing and packaging maven. This guy has figured out how to sell the same damn songs to many of the same damn people so many times it’s astounding. Now before we go any farther, just appreciate that Garth Brooks has only recorded a total of 10 truly original studio albums from which original songs can be culled from for compilations and Greatest Hits packages. Yet Garth has also released an equal number of Greatest Hits and compilation albums, not to mention four Christmas records.

So let’s say that you’re a die hard Garth Brooks fan, of which there are many of, including many that are willing to purchase whatever he releases, corroborated by the incredible sales numbers Garth continues to accrue. Then let’s see how many times you’ve purchased Garth’s very first single, “Much Too Young (Too Feel This Damn Old)” written by Garth and Randy Taylor.

How Many Times Has “Much Too Young (Too Feel This Damn Old)” Been Rebundeled and Sold?

The Garth Brooks Collection was a limited-time, limited run release that included a lot of Garth’s early hits. It was his first ever compilation, and was sold exclusively at McDonald’s. Pay attention, because using exclusive retailers and limited-time runs will come up again as we follow “Much Too Young (Too Feel This Damn Old)” on its long journey. It’s worth noting that this was a “charity” CD benefiting the Ronald McDonald Children’s Charities. But while Ronald got $1, Garth got the remaining $4.99, so it still remained a for-profit endeavor for Garth. And of course “Much Too Young (Too Feel This Damn Old)” was on it, meaning the song was sold an additional 5 million times, though Garth left off some of his bigger hits, like “Friends in Low Places” and “The Dance.”

This was Garth’s first ever true Greatest Hits compilation, and was released mere months after The Garth Brooks Collection. Since the first comp only had some Garth Brooks hits, many who owned the limited-run McDonald’s exclusive ended up buying The Hits anyway. And of course, “Much Too Young (Too Feel This Damn Old)” made the final cut, as did other songs that many Garth fans had already purchased once, or twice at that point. Also important about The Hits is it eventually went out-of-print. Garth, seeing the commercial potential from the compilation, as well as the importance of the album concept and how The Hits could hurt sales of his previous records, eventually had the album discontinued, but not before it sold over 21 million copies worldwide, and the master was buried under Garth’s star on the Hollywood Walk of Fame. This was also the period when Garth went up against the short-lived Blockbuster Music and other retailers for selling used CDs right beside new ones. Garth didn’t want to be competing with sales he’d already made. The Hits is likely where Garth saw the awesome potential of being able to sell the same songs over and over, and do so by limiting supply.

Granted, this release features a live version of “Much Too Young (Too Feel This Damn Old),” but it isn’t like Garth had to lay out the additional production costs for a different studio take, or redo the publishing on it. And of course, Double Live was a massive commercial smash, becoming the greatest-selling live album in the United States ever, and was full of songs many Garth fans already owned.

The Limited Series was a 1998 limited-run compilation re-issue box set of Garth’s first six albums, which means “Much Too Young (Too Feel This Damn Old)” made yet another appearance. Sales were limited to 2 million copies in the United States, because of course, Garth wanted to be able to sell these same songs, and same albums again in the future. Eventually sales capped out at 4 million worldwide, and it became the best selling box set in the SoundScan era. It was a blockbuster, even if sales were purposely limited.

In 2005—seven years after the first Limited Series—Garth Brooks was at it again, but this time repackaging some of his later records into a box set. One of those later records was Double Live, which you guessed it, includes a rendition of “Much Too Young (Too Feel This Damn Old).” The box set was also sold exclusively at Wal-Mart and Sam’s Club, which is why sales numbers on this particular compilation are little sketchy. It’s also fair to point out that just like the first Limited Series, Garth did include extended booklets, bonus tracks, and in this case a DVD to entice consumers to pay for material most already had, and at this point, maybe multiple times over. This is also the first time Garth discovered the genius of releasing these compilations around Christmas. Garth fans may not just buy it for themselves, box sets make great gifts. People can buy multiple copies, and give them away to family. Even if you didn’t want one because you already had most of Garth’s music, you might wake up Christmas morning to find The Limited Series under your tree.

This 2007, 2-disc and 1 DVD compilation was sort of like Garth’s farewell in the midst of his “retirement.” Garth bundled 30 previously-released songs—including “Much Too Young (Too Feel This Damn Old)”—a DVD of his previously-released song videos (which means no additional production costs for him), as well as four original songs to entice people to buy the set since it was the only place you could get the new material. Yes, to purchase four songs you didn’t have, you had to buy 30 that you did. “More Than a Memory” from the compilation also became a smash hit, becoming one of the few songs in country music history to debut at #1 upon release, and enticing folks even further to purchase a physical copy. This was also about the time that the iPod and the MP3 were becoming ubiquitous. But of course Garth wasn’t playing ball. You wanted “More Than A Memory” in your iTunes collection? Well you had to buy “Much Too Young (Too Feel This Damn Old)” and 29 other songs yet again.

This was the album that preludes Garth’s comeback from official retirement. Piggy backing off his appearances at the Wynn Casino in Las Vegas, it is compiled mostly of cover songs delving into Garth’s influences. However, it also includes a copy of The Ultimate Hits, which of course included a copy of “Much Too Young (Too Feel This Damn Old),” and once again drove up individual sales numbers for the record and songs, embellishing Garth’s sales stats along with his pocketbook. This was also Garth’s 2nd Christmas gift-style release, and was originally sold as a Wal-Mart exclusive. Once again, after a certain interval, copies of the compilation went out of stock. No need to have those same songs competing with each other when they’re repackaged for next Christmas.

Another Christmas compilation, and sold exclusively through Target, The Ultimate Collection includes nine discs of mostly previously-released material arranged thematically as opposed to the original album track lists, with “Much Too Young (Too Feel This Damn Old)” appearing as the opening track on the “Old School” disc. It also included a copy of Garth’s newer album The Gunslinger two weeks before it could be purchased elsewhere, once again enticing hardcore Garth fans to pay for something they already had, just to gain access to new music. It’s fair to point out that with many of these box sets and Christmas releases, the price was pretty affordable for the amount of music you were receiving. But Garth was also benefiting from racking up incredible sales data for selling material he had already sold many, many times before.

Another Christmas season, and another repackaging of Garth’s previously-released material. Yes, this one comes with lots of written material in book form, and many “demos” of his biggest songs right beside the hits themselves, including the original version of “Much Too Young (Too Feel This Damn Old).” But come on Garth, we’re not tapped out yet?

And so the same song that Garth Brooks paid to produce over 30 years ago has now been bought and sold on ten different releases, over three different decades, and through the administrations of six different United States Presidents for a sum total of nearly 70 million total copies in circulation. Oh, and even in this late hour of the streaming era, if you want to listen to “Much Too Young (Too Feel This Damn Old)” via an on-demand service, Amazon is your only option since that is the exclusive streaming partner of Garth Brooks.

It’s pretty diabolical what Garth Brooks has done. But it’s also hard to not give the man some credit. Garth could sell ice to Eskimos, or the same song to the same music fans ten times.

What did Waylon Jennings say about Garth Brooks and panty hose?

"Much Too Young (Too Feel This Damn Old)", Garth Brooks