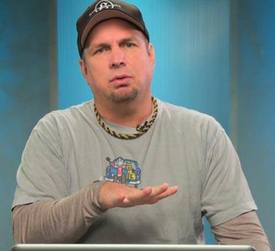 Garth Brooks, the best selling artist in the history of country music, is set to make a triumphant return in 2014, announcing earlier today on ABC’s Good Morning America that he will embark on a landmark worldwide tour. The announcement comes a week after his massive, 10-disc Blame It All On My Roots box set exclusively sold at Wal-Mart dominated the country music charts landing him at #1 on Billboard’s Country Albums Chart, and #3 in all of music.

Apparently despite Garth’s world-beating success, he still is hungry, and has some unresolved business to take up with country music. And looking to get a strategic advantage over his competition, he’s employed the services of the somewhat unproven, but very popular health accessory known as the Phiten necklace, worn by many professional athletes, especially throughout Major League Baseball. 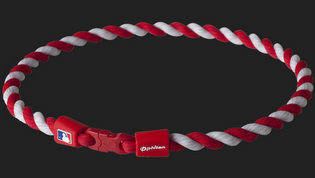 Phiten claims to be able to liquify titanium and infuse it into their nylon necklaces, giving athletes and everyday individuals physiological benefits such as improved strength, dexterity, faster recovery time, and mental clarity. Though the claims of the necklace maker have never been proven through scientific study, many users swear by the health accessory’s benefits.

Garth Brooks has been seen wearing Phiten necklaces in virtually every press photo in the last few months since he’s been plotting his return. Some are claiming it was a Phiten necklace that gave Garth his irrational exuberance during a recent televised CBS TV special live from Las Vegas. Photos from the event show that Garth was wearing a Phiten necklace under his black hoodie. 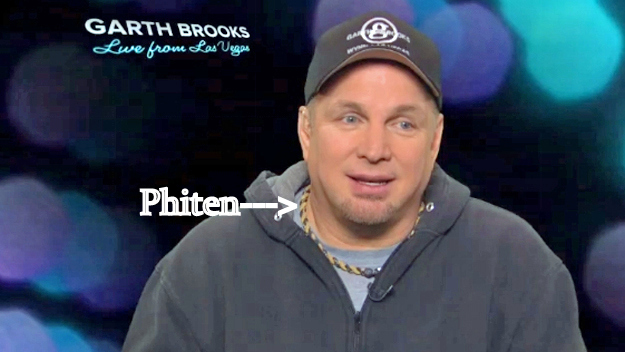 “As we all know, Garth Brooks was out to destroy country music back in the 90’s,” says Brooks spokesperson Malcolm Frankenfurter. “But unfortunately he was unable to finish the job before retiring in 2001 to spend more time with his family. Brooks is hoping his Phiten necklace gives him the extra little boost to destroy country music once and for all on his upcoming tour. With the quicker reaction times the Phiten necklace ensures, he should be able to handle the switchover from Garth to his dark pop persona Chris Gaines more effectively, and be more nimble when he flies out across sold-out stadium crowds suspended on wires.”

Even more damning is this exclusive photo Saving Country Music has obtained from Wal-Mart surveillance video. Shockingly, the video shows Garth himself purchasing a whole cart full of his new 10-disc Blame It All On My Roots box set, potentially to drive up SoundScan numbers to artificially inflate his chart rankings. The signature two-tone color spiral of a Phiten necklace can be seen peeking out from beneath his Carhartt. 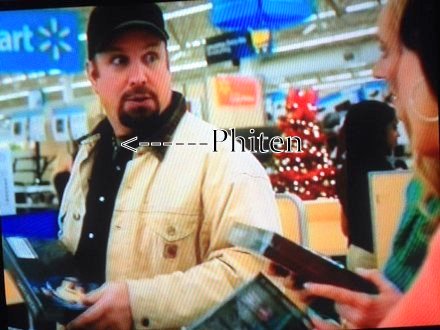 Reports that Garth Brooks also believes that his now famous black hoodie from the Las Vegas special can make him invisible when he puts on the hood and cinches the drawstrings all the way up to his nose, or that his average suburban guy goatee gives him the ability to see women’s privates through their clothes, could not be independently verified.