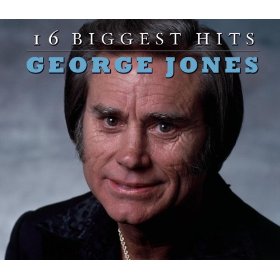 “Nobody wants to listen to their grandpa’s music.”

These were the words spoken by reigning Country Music Association Entertainer of the Year Blake Shelton as part of his broader, now notorious “old farts and jackasses” spiel first spoken on a GAC special, and then later published by Saving Country Music in late January of 2013, sparking off a public uproar.

Well George Jones may haves something to say about that, even though he’s been deceased for nearly 4 months.

Right after George Jones passed away, sales of his music skyrocketed, and have stayed curiously strong since. 16 Biggest Hits re-entered the Billboard 200 Albums chart at #42 the week after George’s death, and six other George Jones albums also re-emerged on Billboard’s “Hot Country Albums” list.

But as much as George Jone’s death was to blame for the spike in sales, so was George Jones’s older fans who are one of the last bastions of CD-buying consumers. Most younger music consumers, i.e. Blake Shelton fans, stream their music, or download individual songs—a practice that means much less revenue for both labels and artists.

As was asserted when first publishing Blake Shelton’s “old farts and jackasses” comments, Music Row is ignoring one of the last segments of the American market that actually buys physical music, and one that makes up one of the largest segments of consumers. Announced last month, music sales are at historic lows, while a recent analysis by country DJ Charlie Cook shows that country radio continues to ignore older consumers more and more as time goes on.

But George Jones’s postmortem sales success was not all due to older country music consumers.

As big as the success of George’s 16 Biggest Hits has been, one of his signature songs, “He Stopped Loving Her Today” enjoyed an even greater resurgence, re-entering Billboard’s Hot 100 Country Songs chart at #21 the week after George’s death—33 years after the song was initially released. But how would this be possible if a majority of George Jones fans are technologically-illiterate elders? Nobody is selling 45’s of “He Stopped Loving Her Today.”

It is because younger, technologically-savvy consumers were also participating in the George Jones revival, buying up 34,000 digital copies of “He Stopped Loving Her Today” the week after his death, and streaming it a whopping 783,000 times. So it wasn’t just old farts and jackasses, it was download-savvy Gen X’ers and Spotify-streaming millennials wanting to listen to George Jones.

Another album crafted by gray-haired guys and featuring old music—Vince Gill and Paul Franklin’s cover album Bakersfield—also had surprising success last week, coming in at #4 on Billboard’s Top Country Albums chart. So bereavement isn’t solely to blame for consumers buying up classic country music. When given a reason, and when given an album worth listening to, classic and traditional country fans of all ages are turning out to purchase music.

As the music industry continues to contract and deal with the dwindling revenue foisted on them by the emerging age of streaming music, they can’t afford to ignore any segment of the music buying public. Of course the younger demographic is always going to be the biggest driver in the music marketplace, and country music must evolve to stay relevant. But country also must offer choice, and balance if it expects to survive the expanding adversity the music industry faces.