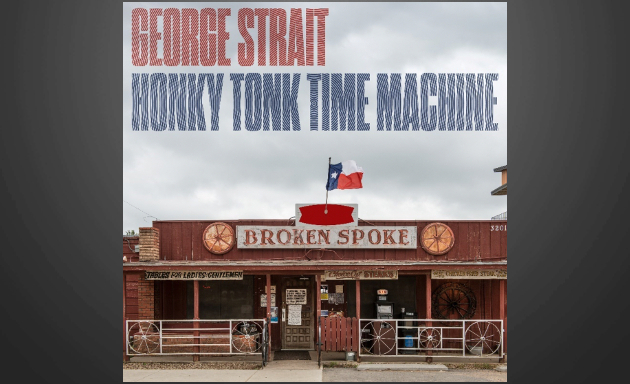 George Strait dropped some juicy hints to us in December about a new record on the way called Honky Tonk Time Machine, and now we have another new song, all all the rest of the details for the record. Set to be released on March 29th via MCA Nashville, the 13-track album will include 12 originals, a cover of Johnny Paycheck’s classic “Old Violin,” and feature Austin, TX’s legendary and always-endangered honky tonk landmark The Broken Spoke on the cover.

As customary with a George Strait album, songwriter Dean Dillon plays heavy in the credits, as does George Strait’s son Bubba. The songwriter pairing of Jim Lauderdale and Odie Blackmon also get a cut on the new record. So does Lori McKenna, with Luke Laird and Barry Dean on the new single just released, “God and Country Music.” (listen below)

With little prospect for radio play, George Strait appears to just be doing what he wants to do on Honky Tonk Time Machine, which is traveling back in time to when country was country. Covering Johnny Paycheck, along with paying tribute to Willie Nelson in the previously-heard “Sing One With Willie” shows, this record will have strong ties to the past.

“I’m really excited to have some new music coming out,” shares Strait. “It’s been about two years since I’ve released a record. It was great writing with Bubba and Dean again and creating such a beautiful song with Bubba and Jeff Hyde. Also, it was a very special thing for me to be able to write and sing one with the legend Willie Nelson. I hope everyone enjoys listening to ‘Honky Tonk Time Machine’ as much as I enjoyed making it.”