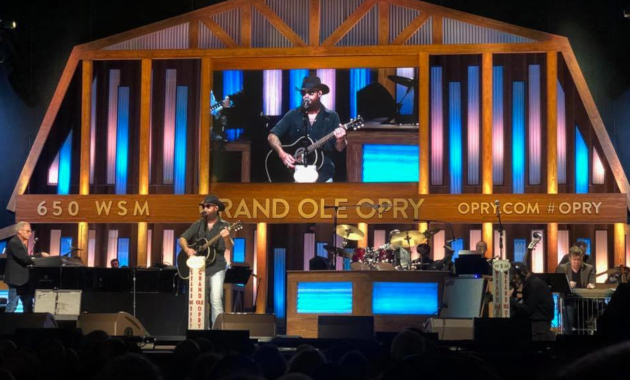 As first reported by Saving Country Music in October, The Grand Ole Opry will finally be returning to television via the recently-announced Circle Network owned by the Opry Entertainment Group—or at least portions of the show will be, along with expanded specialty programming tied to the iconic country music institution. Also coming to television will be the more regular rebroadcasting of vintage Hee-Haw episodes, shows featuring Opry members Craig Morgan and Dailey & Vincent, Elizabeth Cook will also have a show, along with other programming delving deep into country music culture.

The Circle Network has announced the full slate of programming that will be available in 56 markets via Gray Television, as well as in markets including New York, Los Angeles, Dallas-Fort Worth, Tampa and Detroit through a separate agreement with CBS Television, ultimately reaching an estimated 50% of U.S. television households. The network will launch on January 1st, 2020 with 16 original shows, with The Grand Ole Opry programming beginning in February of 2020.

Along with the program called Opry Live which will include new live-recorded Grand Ole Opry performances to be released each week, there will be another show called Opry Debut focusing on artists making their first appearance on the show, and Opry Docs about the history of the Grand Ole Opry.

Though audio of the Grand Ole Opry has always been broadcast by WSM-AM out of Nashville, and though the longest-running program on radio was syndicated across the country for decades (and now can be streamed online via WSM’s website), it’s been many years since the program that made country music famous could be seen on any screen. Certain moments and performances are released via the Opry’s YouTube channel, but it tends to be a very select amount of material, even though cameras are stationed throughout the Opry House, and the building was designed specifically to work for television broadcasts.

The appearance of the Grand Ole Opry on television was always sporadic, starting on the very early days of the show. Between 1955 and 1956, ABC aired a live, hour-long Opry show each month on Saturday nights. A syndicated show called Stars of the Grand Ole Opry was the first ever television show shot in color. When the Opry moved from the Ryman Auditorium in downtown Nashville to the Opry House east of town in 1974, part of the emphasis was to expand the Opry to television. But even though the Opry House was regularly used for awards ceremonies and such that made it onto television screens, Opry presentations were rare aside from PBS airing live performances once a year from 1978 to 1981.

When The Circle Network was first announced, the concern was if the flavor of the programming would be slated more towards today’s country pop audiences and primarily be about lifestyle branding. Though some of the announced shows seem to veer in that direction, others seem to veer more towards the traditional, independent, and Americana side of country. This includes a fishing show with Elizabeth Cook called Upstream, a show called Bluebird Cafe Sessions focusing on songwriting, and Family Traditions following second and third generation country performers. Find the full slate of programming below.

Though The Circle Network has promised Hee-Haw reruns, there is no word on the reboot of the show which the Opry Entertainment Group was exploring back in February of 2017. The newly-launched Circle Network would certainly make for a good home for the show. Further shows could also be on the horizon. Recently announced, the Opry Entertainment Group’s parent company, Ryman Hospitality Properties, just moved to purchase The Moody Theater and Block 21 in Austin where Austin City Limits is taped. The idea behind the acquisition is to potentially help produce more content for The Circle Network in the Moody Theater space.

There has yet to be confirmation on the specific markets and channels that will be included in the network. Gray Television media markets can be found here, but a partnership with CBS will mean other markets are also covered. The Circle Network also plans to launch a premium digital channel available online by the spring of 2020. More information on the specific markets and channels The Circle Network will be found on when it becomes available.

Opry Live: Beginning in February, Opry Live is a compilation of new live-recorded Grand Ole Opry performances that will be released each week. In the Opry tradition, this show will be a mix of today’s top stars, up-and-comers and all-time greats.

Southern Weekend: Hosted by singer and musician Natalie Stovall, each episode will highlight the best in southern living by visiting all the great attractions of the South including restaurants, museums, unique stores, and music venues. Country music artists will join in along the journey and share some of their favorite places.

Backstage at the Opry: Peek behind-the-scenes of the Grand Ole Opry, alongside artists as they go from rehearsals to the stage – and everything in between.

Craig’s World: Follow Opry member and Army Veteran Craig Morgan at home and on the road as he and his tight-knit family navigate triumphs and challenges while developing businesses, writing hit songs and balancing a country music career.

Authentic America: Hosted by veteran TV host Nan Kelley and her Grammy- nominated husband Charlie Kelley, Authentic America takes viewers on a two-wheeled version of the classic American road trip by way of backroads and rural routes exploring some of the country’s best kept secrets – including lesser known attractions, off-the-beaten path eateries, and most interesting of all, the people who make America one of the most colorful and eclectic nations in the world. Guests include Blake Shelton and Alabama.

Upstream: Join Elizabeth Cook as she invites artist guests to a new fishing location each episode. While the fishing may be good, the real catch is the conversation. Early guests include Cam and Shooter Jennings.

The Write Stuff: Viewers get a peek inside the inspiration and creation of some of country music’s greatest songs. Join country music hit makers as they walk step-by-step – from the initial concept to the final chord – and share the key licks and lyrics that brought their stories to life. Episodes feature Little Big Town, Old Crow Medicine Show and Travis Tritt.

Better Half: Meet the larger-than-life spouses of some of today’s brightest stars and find out what gives them their own star power. Featured spouses include Samantha Busch (wife of NASCAR driver Kyle Busch), Kate Moore (wife of Justin Moore) and Christine Ballard (wife of Frankie Ballard).

Dailey & Vincent: Join Dailey &amp; Vincent – the world-renowned bluegrass, country and gospel duo – as they host and perform in front of a live audience along with some notable friends like Vince Gill and the Oak Ridge Boys.

Stand Up Nashville!: Shot before a live audience at Nashville’s legendary Zanies Comedy Club, each episode of Stand Up Nashville! features a well-known comedian host as well as four up-and-coming comedians. Laugh along with a packed Zanies’ house and the most brilliant comics the South has to offer.

Family Traditions: Follow the next generation of country’s legendary families as they honor their roots while forging their own path. Episodes include Sam Williams (grandson of Hank Williams and son of Hank Williams Jr.) and Ashley Campbell (daughter of Glen Campbell).

Phil Vassar’s Songs from the Cellar: Join country music hit-maker, Phil Vassar, as he welcomes artists, songwriters, entertainers, athletes, and wine enthusiasts into his favorite place to write songs – his wine cellar! Each episode will feature conversation and collaboration along with a shared drink. Simple in concept yet rich in content, Phil’s laid-back style and quick-witted personality brings out the best in his guests as they share entertaining stories about their interesting lives. Guests include Kelsea Ballerini, Charles Esten, Mike Tyson and Hunter Hayes.