On Tuesday, December 10th, a big real estate deal was announced that has the potential to significantly bridge the two American music hubs of Nashville and Austin like never before. Ryman Hospitality Properties, which owns The Grand Ole Opry, The Ryman Auditorium in Nashville, as well as numerous other important music properties in Nashville and beyond, has struck a deal to purchase the 37-story, full city block-sized mixed-use complex in downtown Austin along second street known as Block 21.

Along with housing the W Austin Hotel, numerous businesses and restaurants at the street level, and 53,000 square feet of other Class A commercial space, Block 21 is the location of the Moody Theater, otherwise known as the home of Austin City Limits—the longest-running music television show in history. Once housed in a much more quaint location on the University of Texas campus in a Communications building, the show moved to the Moody Theater in 2011. An iconic statue of Willie Nelson, who played the first episode of the venerable show, sits at the southeast corner of the property. More importantly, many live concerts are also held in the Moody space under the name “ACL Live” throughout the year. Ryman Hospitality is paying a whopping $275 million for the property, including assuming $141 million in debt still owed for the original development.

“Ryman Hospitality Properties is a great company that understands and respects the strong connection that exists between Austin and its music scene,” says William H. Armstrong III, who is the chairman, president and chief executive officer of Stratus Properties, which currently owns the development. “We think Ryman Hospitality Properties’ expertise in both hospitality and live entertainment, plus their demonstrated stewardship of the iconic Ryman Auditorium and Grand Ole Opry makes them the ideal company to usher Block 21 and ACL Live into their next decade.”

Undoubtedly, Ryman Hospitality’s expertise is managing real estate assets with strong ties to live music, similar to Block 21 and the Moody Theater. But the concern is if the sale will be yet another loss for the unique character of the Austin music scene, which is already under significant stress due to the rapid closure of multiple iconic music venues, the vacating of multiple big-named musical icons from the city, and cost of living spikes and gentrification pushing musicians out of the region and to other music markets, including Nashville. Austin is also transitioning from a more arts-centric culture to a more tech-central culture from the workforce moving to the region. In mid November, guitar legend Redd Volkaert announced his departure from Austin come the end of 2019—just the latest sign of contraction in the Austin music scene.

“Through this acquisition, we have the opportunity to build a relationship with the millions of music lovers who visit Austin each year that will allow us to cross-promote our brands to a new, but related customer,” says Colin Reed, chairman and chief executive officer of Ryman Hospitality Properties. “We also believe there are significant opportunities to create content that will position Austin and Block 21 as a must-visit destination for country lifestyle consumers through our new TV platform, Circle, which is set to launch in early 2020.” 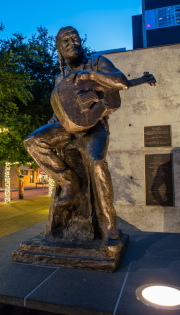 Therein lies the greatest concern for this new deal. What do mid and top-level managers in Nashville know about the unique aspects and legacy of Austin music? Cross promoting Ryman Hospitality brands like The Grand Ole Opry and corporate-sponsored “lifestyle” brands that Ryman Hospitality regularly partners with in Nashville in many ways feels like the antithesis of what Austin music is all about. Willie Nelson and others fled Nashville for Austin in the 70’s to get away from the consumer-centric culture of Music City, finding a home in the creative autonomy of the Texas Capital.

Also, Austin music isn’t just about country. Psychedelic rock, hip-hop, punk, blues, and jazz all play important roles in the vibrant and diverse music environment that makes Austin so unique and interesting. Though Ryman Hospitality taking control of the Moody Theater might feel like a short-term win for country fans in Austin, it could be a long-term loss for the diversity and uniqueness of Austin music in general.

Of course too much can also be made of this news. It might take months or years to truly assess the impact of the acquisition of Block 21 by Ryman Hospitality. The deal is expected to close in the first quarter of 2020. Also, the Austin City Limits television show is its own autonomous production, and may not be affected at all by the change in landlords. It’s the more frequent ACL Live events held at the Moody Theater that will now be under the auspices of Ryman Hospitality. Fair concerns should be raised about the sale to make sure the sovereignty of Austin music isn’t significantly affected by this acquisition.

Also this week, Austin City Limits announced their lineup for the second part of their current 45th season. The Black Pumas are the only act out of the ten from Austin, TX, while double-platinum selling pop artist Billie Eilish makes the bill for a full hour segment, and The Raconteurs will be appearing for a second time. The show that was first formed to showcase and document Austin talent has faced increasing criticism over the years for ignoring Austin legends such as Ray Wylie Hubbard along with scores of influential up-and-comers while booking acts like Kane Brown who recently made his ACL debut. At a time when Austin music continues to face increasing pressures, the primary media brand for the city continues to look elsewhere to fill its talent roster.

The Grand Ole Opry and the Ryman Auditorium are the cornerstone properties of Nashville music culture, similar to how Austin City Limits and the Moody Theater are the cornerstones of the Austin music culture. Putting them all under the same ownership is a potentially significant move in the continuing homogenization of American music. Similar to how many point to the consolidation of ownership in radio stations for robbing music of regional diversity, this sale could have a similar effect.

LiveNation also has many worried as the massive live music players continues to purchase venues and festivals. Last week it was announced that LiveNation has paired with the University of Texas to build a new $338 million arena in Austin. In 2014, LiveNation took a 51% ownership stake in Austin’s biggest live promoter C3 Presents. C3 books and operates Austin’s major multi-genre music festival, ACL Fest every October, named after Austin City Limits.

It’s booming times for big music business in Austin, but it’s often at the expense of the independent artists and venues that are at the heart of what went into making Austin the Live Music Capital of the World in the first place. Perhaps the Ryman Hospitality acquisition of Block 21 and the Moody Theater will be a good thing. But the Austin music community should be vigilant in the face of the ownership change. The Grand Ole Opry is a historical musical institution with proud traditions. But the last thing Austin music needs is the Moody Theater and ACL Live morphing into The Opry West.