The definitive biography on Guy Clark finally has a release date, and further details have been revealed. Fans of the revered songwriter who passed away on May 17th have long anticipated the coming of Without Getting Killed or Caught: The Life and Music of Guy Clark, and they will finally have their patience rewarded on October 18th. The 406-page work to be released on Texas A&M University Press is written by long-time biographer and producer Tamara Saviano, and includes information from over 200 interview subjects starting in 2008, and 113 photos from throughout Guy Clark’s life.

Beyond just a biography of Guy Clark, Without Getting Killed or Caught also includes many details on Guy’s long-time wife, songwriter, and visual artist Susanna, and the couple’s best friend, Townes Van Zandt. Tamara Saviano got unprecedented access and insight into Guy’s past, including journals from Susanna, and unfettered accounts of Guy’s past from interview subjects. 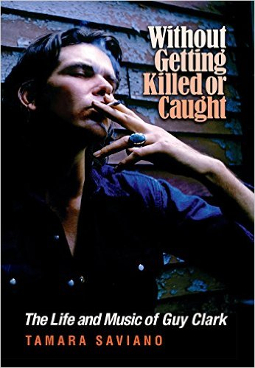 During the biography process, something unconventional happened that also makes the book unique: Tamara Saviano, the former editor for Country Music magazine, became close friends with Guy, and eventually produced multiple records bearing his name. Whatever Saviano may have lost in objectivity, she gained in further insight the closer she became with Guy. “I learned details that nobody else knew, including his closest friends,” says Saviano. “I had no idea that I was going to grow to love the old curmudgeon, but I did.”

Along with recording his own music, Clark wrote songs for Johnny Cash, George Strait, Alan Jackson, Ricky Skaggs, Vince Gill, The Highwaymen, Jerry Jeff Walker, David Allan Coe, and even current stars like Brad Paisley and Kenny Chesney. Ricky Skaggs had a #1 hit with the Guy Clark song “Heartbroke.” Steve Wariner had a #1 hit with the Guy Clark song “Baby I’m Yours.” He co-wrote “She’s Crazy for Leavin’” with Rodney Crowell, which also became a #1 hit. And Guy’s “Desperados Waiting On A Train” was one of the marquee songs for the country music supergroup The Highwaymen.

With the biography, a documentary film on Guy Clark has also been in the works for some years, spearheaded by Saviano. It is said to start out with Guy and his soon-to-be wife Susanna Talley pulling into Nashville in their white Volkswagen bus loaded with all their worldly possessions, including a scrap from a burger sack with a partial lyric that reads: “If I could just get off of this L.A. Freeway without getting killed or caught,” and ends with a scene from Guy’s 73rd birthday where Terry Allen, Rodney Crowell, Steve Earle, Ramblin’ Jack Elliott, Joe Ely, Robert Earl Keen and Jerry Jeff Walker sit around and swap stories. No word at the moment of when the documentary may be released.

Without Getting Killed or Caught is available for pre-order, and has already been recognized by Amazon as a bestseller in the music category.

Pre-Order Without Getting Killed or Caught