Trigger Down with Pop Country 183 Comments

And an act of quiet desperation from the music industry.

On Tuesday it was reported that Academy Award winning actress Gwyneth Paltrow was fielding offers for a record deal to record a “country pop” album, and later that she had signed a $900,000 deal with Atlantic Records.

I am quite astonished with this in so many different ways I don’t even know where to start. Actually I do. How about with the fact that Gwyneth, across multiple platforms, including movie, radio, and performance, and from a critical and commercial standpoint, has already failed in country music.

The movie “Country Strong”, which is the impetus for this whole country music career, was a colossal critical and commercial failure. Though the soundtrack of the movie made it all the way to #2 on Billboard’s country charts, the sountrack’s lead “Country Strong” single recorded by Paltrow charted a paltry #30. The latest single “Me and Tennessee”, a duet with Tim McGraw, is being universally panned by critics, and sits at #41 on the charts, while the “Country Strong” movie can’t be found in a theater near you.

The Gwyneth signing is like a “go down gambling” move from a dying industry that is incapable of developing real talent, but they’re laying their bet on a table they know is rigged. And when will this album come out at the best estimate? 6 months? Christmas? 2012? Will there even be a music industry left to release this when the release date comes? Is there any chance that unless this is a top 5 country album that Atlantic would come even close to recouping their investment? I would have given her 20 grand and some singing lessons. 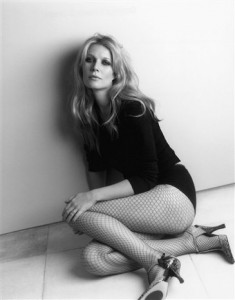 One surprising thing about all this is that Nashville has little to do with it. I’m sure they’ll use Nashville studios, songwriters, and session players, but Atlantic is not a top Music Row label. The closest thing they have to a country superstar is Kid Rock. Though maybe this is a symptom of another problem, that being the creation of a mono-genre.

And I don’t mean this to be a knock on Gwyneth, I will get her album when it comes out, and do my best to listen it it honestly and fairly, but the model right now for new country stars is to find, well, models, and push them out on stage with fingers crossed they can hold a tune. As much as I hate that mold, at 38 and rising, Gwyneth doesn’t fit that at all. By today’s pop standards, she’s tore up and irrelevant. It doesn’t make sense from pop country’s own perspective.

How about giving $100,000 respectively to Ruby Jane, Rachel Brooke, and Caitlin Rose, three young, beautiful, and talented singers that could actually offer a sustainable future for the industry instead of “the fat get fatter” focus that has put the industry in this position. $100 Grand a piece is fine. Gwyneth can keep the rest. Oh, and those girls can also write their own songs, though another alarming thing about this story is that some are reporting that Gwyneth will be doing her own writing. This smacks of a celebrity coming in to offer a “third for a word”, as I highlighted in this article, robbing more deserving songwriters of revenue.

I know what the thought is here though: take a name that is already a international franchise, and attach music to it, and cross market it through movies and television. Ironically though, after Gwyneth’s last performance on Glee earlier this week, I was flooded with comments and emails about how her Glee character “insulted” Tennessee:

I just read in the newspaper that 90 high school girls in a Memphis school district got pregnant within three months. I mean, it is Tennessee, but still!” said Paltrow’s character, subbing as a sex-ed teacher.

As pliable and gullible as the country music consumer is, they rejected Jessica Simpson, they rejected Trace Adkins’ awful “Brown Chicken, Brown Cow”, and they rejected the Dixie Chicks after making what in the end were very very innocuous political statements. Oh, and they rejected “Country Strong” as well. I don’t think a passing comment on Glee could affect her, but the Hollywood persona most certainly will. Taylor Swift has more country cred than Gwyneth Paltrow.

And then there is Gwyneth’s performance at The Oscars. She was introduced as a “Singing sensation” and “Country music’s newest star”, but then came out, and by the look on her own face, which showed frustration, and by the end absolute embarrassment, she delivered a performance that was somewhere between flat and flat-out awful. By the end she looked like she had swallowed a razor blade. How many times have we replayed this scenario out over and over from these recent, stupid award shows and Super Bowl performances, and Star Spangled Banner renditions. She can’t sing. Gwyneth Paltrow can’t sing.

Taylor Swift is about to release her song “Mean” as her next single. It is about an unnamed music critic, that some think might be me. The leading candidate though is a cat named Bob Lefsetz, a music industry writer, who famously said after Taylor bombed her performance at The Grammy’s with Stevie Nicks, that, “Now the whole world knows that Taylor Swift can’t sing,” and that it was over for her. Well Bob Lefsetz was wrong. Just like Taylor’s CMA for Entertainer of the Year proved that a pop star could make it in country, and spurned acts like Sugarland and Lady Antebellum to follow that mold, Taylor Swift’s recovery after her Grammy performance proves that you don’t even have to be able to sing to be a massive star in music.

Our singers can’t sing. No wonder our leaders can’t lead, your food gives you Cancer, the shit you buy at Wal-Mart breaks after a week, and oil is $100/barrel even though we’ve got so much of it glutting the system, they can’t build silos in Cushing, OK quick enough to deal with how quickly it is piling up.

I know you may think this is grandstanding, but read the quote at the top of the page, and every Saving Country Music page. When you take mediocrity, put it up on a marble pedestal, shine a hot spotlight on it, shower it with money, and command the masses to come worship in it’s shadow, this is the kind of shit you get.