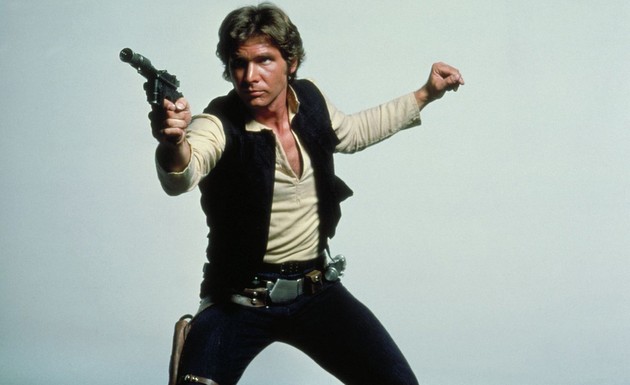 Who hadn’t thought that when Han Solo was outrunning Imperial starships in the Millennium Falcon—not the local bulk-cruisers mind you, I’m talking about the big Corellian ships now—that he wasn’t booming a little Waylon Jennings, Johnny Cash, and Billy Joe Shaver? Remember, Han was a smuggler, so it’s only fitting he’d find a hankering for music that many a moonshine runner would blare as they made a run down the mountain. No offense to composer John Williams and his brilliant orchestrated soundtrack, but for everyday smuggling runs, why not spin a little Bob Wills or Red Sovine?

Forget that the Star Wars universe existed “A long time ago” and in a galaxy “far far away.” With wormholes and warp speed and rips in the space time continuum, it could happen that Han Solo would stumble upon some classic country gold in a drab spaceport cantina’s juke box somewhere. Hopefully by the time commuter space travel is perfected, we can figure out how to fairly compensate songwriters and performers in the streaming music medium.

Until then there’s Spotify, and as one of hundreds of the new Star Wars’ cross marketing schemes, they’ve released Spotify playlists for the principle Star Wars characters. Spotify is also assigning characters to different users based on the similarities between their personal playlist, and the playlists of the Star Wars cast. And if Han Solo’s rough hewn character and black vest wasn’t a dead giveaway that he was a classic country fan, then his Spotify playlist is.

Also mixed in there is some Cream, Credence Clearwater Revival, a good dose of classic rock, and some other interesting cuts. About the only thing that is missing is Tom T. Hall’s song “May The Force Be With You Always” released in November of 1977 (the same year of the original Star Wars movie). It made it all the way to #13 on the country charts.

Spotify users can launch the playlist by clicking here, and if you want to match your playlist to a Star Wars character, simply go to spotify-starwars.com .

Other playlists for prominent Star Wars characters include Brit rock for Obi-Wan, Modern Pop for Luke Skywalker, power pop for Princess Leia, Techno for R2-D2, classical for C-3PO, hair metal for Chewbacca, and early metal for Darth Vader. There’s also apparently an alternative playlist for Han Solo that includes Bro-Country and hip-hop, but I haven’t been able to engage the Saving Country Music tractor beam on it so far to dissect its songs. So if you happen to stumble upon it, then may the force be with you, always.