Family Tradition, The Three Generations of Hank Williams, a new book by Susan Masino chronicling the lives of Hank Williams, Hank Jr., and Hank III, was just released today via Backbeat Books. Though the book isn’t chock full of brand new revelations about the older two Hanks–Masino instead delves in depth for the first time about how the themes of their lives are intertwined–she was given “unprecedented access” to Hank III, and being the first print book to deal with his story in detail, it carries a lot of before unknown facts and information about the youngest Hank Williams.

Hank III talks candidly about his upbringing, and his molestation as a child by his great uncle (that he sings about in his song “Candidate for Suicide” off the album Damn Right, Rebel Proud):

My mom always told my grandmother, “Never let Shelton go away with him . . . ever.”

Hank III also talks about his feuds with Shooter Jennings and Kid Rock, and his long contentious relationship with his father, Hank Jr. The story Hank III tells is of a father barely in the picture, not giving him any financial or emotional support. One story involves Hank III trying to see him before Hank Jr. departed on his private jet.

. . . I was five minutes late and they couldn’t wait because I was stopping to buy a cowboy hat and they took off and left on the plane. So I remember crying over that at a pretty young age… 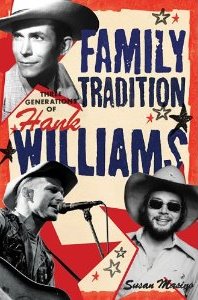 Many people assume that Hank III landed his deal with Curb Records–the label he battled with for over 14 years– through his father, but Hank III tells a different story:

So I went down to Music Row and got a manager, Jack McFadden–He’s managed Merle Haggard, Buck Owens, Billy Ray Cyrus, so I thought I would be on his level, a little bit. He said, “Shelton, I want to deal with Mike Curb because he’s in Nashville more than he’s in California or New York.” I said okay… I signed on the dotted line, didn’t do much research on the contract, because I believed Jack had my best interest. Sure enough, he didn’t.

The other institution Hank III has done battle with is The Grand Ole Opry through his Reinstate Hank campaign. Though Hank III talks about being mostly influenced early on by rock bands like Kiss and Ozzy Osbourne, his mom in the book says, “Since he was four, he says he wants to be on The Grand Ole Opry.” Hank III’s stance on wanting Hank Sr. reinstated to the Opry came between him and Hank Jr. when III was playing on Broadway in Nashville at The Bluegrass Inn one night, and Jr. was playing down the street at the Opry:

What I actually said was, “I hope you find somewhere else better to play than The Grand Ole Opry, until they show respects to your father. And Hank Jr’s reply was, “Well, I’m done with The Opry.”

Hank III also talks about his future, now that he is done with Curb Records, and his newly-kindled relationship with his son, who was the reason Hank III signed a music deal in the first place.

“I finally got to be reunited with him after all of these years, just a couple of years ago.” While Hank III was shopping for clothes, the woman behind the counter said, “You probably don’t recognize me, but I am am the mother of your child.” Hank III explained. “I said it was nice to talk to her without having to go through a lawyer.”

About being free of Curb:

“It’s like a new beginning that will be great on one hand, and on the other hand it’s going to be awful as far as control, stress, taxes–and I don’t have that great of a business team behind me. So that makes it a little more complicated.

Family Tradition is a good read, and a full review of the book is upcoming.