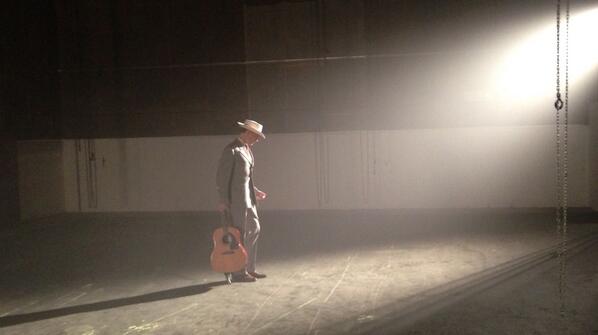 The highly-anticipated biopic movie on the life of Hank Williams called I Saw The Light wrapped production in Shreveport, Louisiana on Friday (12-12), and now the film will go to editing and get ready for a planned release of late 2015. Based off of the biography from Colin Escott and starring British-born actor Tom Hiddleston as Hank, I Saw The Light is being produced and directed by Marc Abraham and has become a project of great intrigue amongst country music fans.

“They had a crew of 150 that worked on the project, and 40 production days,” says Arlene Acree of Film Shreveport Bossier who looks to promote the twin cities as a movie filming destination. “As far as economic impact, they booked 4,500 rooms for the duration. The project location wise, because we doubled for so many places, had 55 actual film locations total, which is a lot for a feature film. The ease of getting around the Shreveport/ Bossier City area is very good because of our infrastructure, so they would do maybe two to three locations a day, and it was a fast-moving project because of their schedule. It’s a biopic feature, so there’s a lot to cover in 40 days.”

Even though the film’s story takes Hank Williams from Nashville to Shreveport to New York City, the greater Shreveport / Bossier City area became the location for it all.

“We doubled for Nashville, Montgomery, AL, Shreveport as Shreveport obviously, and New York City,” says Arlene Acree. “We had one day shooting in downtown where we had 1940’s yellow cabs dubbing for New York. That was one thing that was really cool to see. The vintage movies are a lot of fun. They dress the time period and have the period cars. Our downtown has been described as a huge back lot.”

Arlene says I Saw The Light Was not the biggest film to ever shoot in Shreveport, but it might be the most important and welcomed.

“We’ve had bigger project that were more budget and had more shooting days. But this one was very special in the fact that everyone was very well-receiving. If they were shooting in their home, they were very excited about it because of the nature of the film. Just to know this is the biopic feature of Hank Sr.’s life, I think that made it very very special. Overall the community really embraced—they all of our projects—but this one was kind of dear to our heart because of our connection with Hank Williams Sr. here, of course with ‘The Louisiana Hayride’ and he lived here as well for a short time.”

Though information and pictures from the shooting of the film have been very few and far between, Tom Hiddleston did talk to one local television station reporter and posed for a shot while wearing period Hank Williams garb during the production. Hiddleston complimented Shreveport and the crew.

READ: First Images of Hiddleston as Hank Williams from “I Saw The Light”

The casting of Tom Hiddleston to play Hank Williams has been a controversial one in some sectors. Hank’s grandson, Hank Williams III, has been a vocal opponent of the casting, saying that it would take an American to understand the unique the role of playing country music’s first superstar. Executive music producer for the film and Hiddleston’s personal vocal coach Rodney Crowell has defended Hiddleston, saying he’s “the right actor for the job.”

“This project has already created a lot of buzz,” says Arlene Acree. “I can’t wait to see the movie. It’s going to be very exciting.”