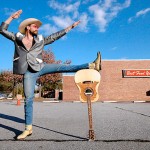 When I first saw Jonny Corndawg’s Down on the Bikini Line album come across the wires this summer, with this dude’s ironic name, the ironic album cover and title, and a track list of ironic songs, I didn’t even give it a sniff. Go ahead, accuse me of judging a book by it’s cover, but when The Nashville Scene anointed this guy an “Outlaw”, compared him to David Allan Coe and Down on the Bikini Line to Coe’s Penitentiary Blues, I knew I couldn’t avoid taking a deeper look and listen any longer.

Jonny Corndawg, or whatever his real name is, is not a cowboy, he’s a marathon-running hipster making fun of you and me and rural country culture with his ironic getup and cornpone songs. And when I say “hipster” I mean take-your-iMac-down-to-the-local-coffee-shop-and-pontificate-loudly-about-micro-loans-to-battered-African-women-to-get-laid-by-anthropogy-majoring-college-girls-looking-to-rebel-against-their-Judea-Christian-upbringing hipster. It’s all irony folks, the cover, the songs, the hat, the boots, his leather-clad guitar with the Chevy emblem on it, it’s all designed to poke fun at country culture, and not in a way that is either enlightening, respectful, or that carries a message. It’s for attention.

Now, when you cyber stalk this dude, you will find some people defending him, pointing to his serious leatherworking passion or his real-life truck driving experience, or this, or that to say this guy is just a rare bird that can’t be pigeon-holed and nobody should try. All of that may be true, but the two things I know for sure after listening to this album many times is 1) he employs a tremendous amount of irony in his music 2) he’s craves a tremendous amount of attention. And both of those things are fundamental in the ironic hipster culture. 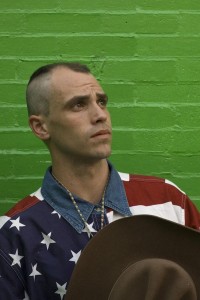 On his own website he says about Down on the Bikini Line that it’s, “in the vein of that obscure ’70s gay country that housewives would discover on a Bear Family reissue in twenty years” on a page that, for irony, uses a soccer ball template for the screen background. Oh, and let me mention that he also used Kickstarter for this album, not to record it, but to promote it: i.e. the need for attention.

But the thing that really gives him away is the pentameter and the higher register that he sings in, which when you strip all the visual things back, is the undeniable mark of indie hipster music and can’t be explained away by other things that may or may not exist in his schtick. And even if he truly isn’t a hipster, I don’t know if it matters because this is an instance where perception truly is reality, and my perception of Jonny Corndawg is that he is making fun of you and me, and I can’t get that feeling out of my head to submit to this music.

And just to clarify, there is nothing specifically wrong with hipsters, hipster culture, irony, or irony in music or country music specifically. There are a lot of indie bands and acts I appreciate, but I appreciate them in their element and when they’re represented authentically. And even when irony is brought to country music, it can work as long as it feels like there’s still that underlying element of respect there, or if there’s a message, like making fun of modern pop country for example. Just a few weeks ago I reviewed an album from Some Velvet Evening that employed irony rather well, and whenever these comedy/ironic albums come up, I always refer back to one of the best ever done, Ween’s 12 Golden Country Greats from 1996. 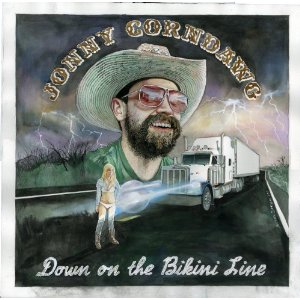 Now the next thing you probably expect me to do is wizz all over Jonny Corndawg’s music specifically. Well unfortunately folks, I am unable to do that. Because despite all that was said above, when you clean the slate of all the irony and hipster-rific schtick, what you have here is some pretty amazing music and intelligent, funny songwriting, and a lot of well-executed and engaging country instrumentation in songs that are just undeniably great.

From Outlaw to gospel and everything in between, Corndawg displays himself as a master of his craft, a brilliant artist and a tireless student of his medium who understands timing, tones, and texture. As you listen to this album, you begin to understand that the quirkiness of the Jonny Corndawg character is an outside symptom of the brilliance of the artist inside of him, bursting with creativity no matter where it is expressed: music, leatherwork, or in the case of the “Jonny Corndawg” music persona, character creation. The dude seems to be like a cultural sponge, soaking up Ameriana, and not only understanding the modes of how it works, but picking up on the nuances that engage people and make them laugh.

The 1/2 time Outlaw-esque “Shaved (Like a razor)” I hate to love. The upbeat and rocking “Chevy Beretta” and “Red on the Head” get your heart pumping and have you laughing out loud. The spatial “Night Rider” is delicate and intelligent. And even the songs that are more indie hipster rock instead of country like “Undercover Dad” still work within their element.

So did I come to an epiphany on Jonny Corndawg eventually and “get it”? Well, no, no I didn’t. And I am usually one of those guys that does “get it” and tries to tell others they should as well. Because for even how engaging I find this music, I can’t detach the hipster irony from it enough to thoroughly enjoy it without reservation.

In the end what you have here is a mixed bag: great music from an ironic hipster weirdo. I wouldn’t go to battle if anyone told me this was the most brilliant country album in a long time (though make no mistake, he’s no Outlaw). Nor would I go to battle with someone who asserted it was awful and insulting. So for now, Jonny Corndawg remains an enigma for me. And I have a feeling he would be OK with that, if that wasn’t his plan all along.

1 gun up for excellent music and songs. 1 gun down for excessive hipster irony.

For folks that care about these type of things, Josh Hedley, who regularly plays violin for Justin Townes Earle appears on this album, as does Caitlin Rose in a backup vocal role.

Buy Down on the Bikini Line directly from Jonny Corndawg