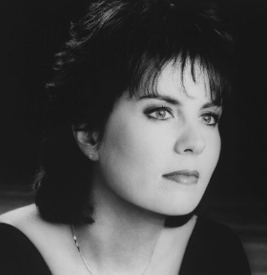 Another day, and another unfortunate passing in the country music community. On Tuesday morning (11-15) it was announced that Warner Bros. recording artist and once marquee Grand Ole Opry performer Holly Dunn has died. Dunn had announced earlier this year that she was diagnosed with ovarian Cancer. She was 59-years-old.

Active mostly in the late 80’s into the mid 90’s, Dunn accumulated 10 Top 20 hits, including two #1’s with 1989’s “Are You Ever Going to Love Me,” and 1990’s Yoakam-esque “You Really Had Me Going.” Her song “Daddy’s Hands” from her debut self-titled album is also a fan favorite, and helped put Holly Dunn on the map when she was still signed to a minor label.

But like so many country stars, after about five or six years of success, the industry decided they had gotten about all they wanted from Holly Dunn, and she slowly faded away from sight. Her last record on Warner Bros. was 1992’s Get It Dunn, but the singles failed to crack the Top 50. In 1995 she released an album via River North Records, but her mainstream career was ostensibly done. This was confirmed when she received a phone call from the Grand Ole Opry.

“I had really participated as a younger member,” Holly Dunn told the The 9513.com in February of 2010 in one of their Where Are The Now? segments. “I hosted the TV show and backstage show for two years. I was Bill Anderson’s substitute host when he couldn’t be there. And I did commercials for them and radio for them. I loved the Opry and what it stood and stands for.”

But that love was not reciprocated. No longer living in Nashville, but still willing to keep up with her Opry commitments, Holly Dunn received word that she had been removed as a member.

“I have some amazing memories. I wish there was a way, though — just to make a suggestion to them — to keep a list of folks that were members in the past,” she said. “This whole total expunging you from the list is sort of a little harsh, I think. There are people on that list that I know for a fact might make it once a year if they’re lucky. It’s a little subjective. That’s my only gripe.”

Subjective is right. As is pointed out every year by Opry blogger Byron Fay, as well as Saving Country Music, many of the Grand Ole Opry’s contemporary stars regularly do not meet their performance requirements on an annual basis, include some such as Blake Shelton who have gone years without making any appearances at all. In fact the only current mainstream star that does honor her commitments regularly is Carrie Underwood. Darius Rucker, Rascal Flatts, Brad Paisley, and others habitually come up short with their number of appearances per year, yet their Opry membership is never questioned.

The treatment of Holly Dunn and others also hearkens back to the way some country fans feel about how Hank Williams was handled by the Opry. Kicked out for drunkeness and missing rehearsals, the Reinstate Hank campaign has looked to add his name back to the Opry membership list since he had such a huge impact on the institution and the Opry regularly uses his name and likeness to this day.

As Holly Dunn pointed out, Opry membership is an incredible honor and can cement the legacy of a performing artist. Some artists retire, move away, or die, and it’s unfortunate how the Opry seems to deal with these names like they never existed. A proper way to honor past members is all proponents of the Reinstate Hank movement and fans of artists like Holly Dunn have ever asked for.

Holly Dunn officially retired from performing in 2003 and moved to Santa Fe, New Mexico to pursue her passion as a painter. She died in the early morning hours on Tuesday in Albuquerque.