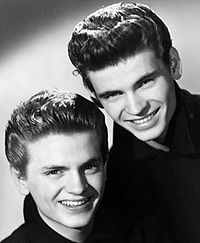 Phil Everly of The Everly Brothers was part of one of the most commercially-successful and creatively-inspirational acts in the history of American popular music. As country and rock & roll were beginning to take root as institutions of American culture, The Everly Brothers were only outpaced in popularity by artists like Elvis Presley when it came to sales and radio play. Between 1957 and 1962, The Everly Brothers reportedly earned $35 million in record sales. Their song “Cathy’s Clown” sold 8 million copies itself. Numbers like that when adjusted for inflation are unparallelled in music today.

But unlike Elvis, The Beatles, and other such acts that withstood the test of time to become commercial success stories in multiple decades, The Everly Brothers seemed to hit a wall in the early 60’s, and never really rekindled their popular magic later in life. Why did this happen? How could an act that was so popular, and seemed to resonate so deeply with the American public get lost in the shuffle?

Though The Everly Brothers are considered more a product of the rock & roll world, their publishing and management resided on a multi-block stretch of road in Nashville known as Music Row, and they arguably became one the first, and one the biggest casualties of that campus in the history of music.

The well-known guitar player, producer, and music executive Chet Atkins was a close friend of the Everly family dating back to before the brothers were a duo and were known more as a family band with their father Ike. Chet brokered the brothers’ first record deal with Columbia in early 1956. But when their first single “Keep A’ Lovin’ Me” failed, Columbia promptly dropped the duo.

So then Chet Atkins introduced the brothers to Wesley Rose, son of Fred Rose, the well-known songwriter and founder of Music Row publishing house Acuff-Rose with Roy Acuff. When Fred Rose passed away in 1954, Wesley took his spot as President of Acuff-Rose, and also signed on to manage The Everly Brothers after the introduction from Chet Atkins. Wesley promised the brothers a record deal if they would sign on with Acuff-Rose as their publishing house, and the duo obliged. This led to the The Everly Brothers’ deal with Cadence Records where they finally found success. Then after 3 successful years on Cadence, The Everly Brothers signed a massive 10-year multi-million dollar contract with Warner Brothers, and became one of the biggest names in all of American music.

However in 1961, the brothers had a falling out with Wesley Rose. At the behest of Wesley Rose, the brothers only used Acuff-Rose writers for their material, especially husband and wife songwriting partners Felice and Boudleaux Bryant. But as time went on, The Everly Brothers wanted to record songs that didn’t fall under Acuff-Rose publishing. Wesley Rose adamantly refused, so The Everly Brothers dropped him as their manager. At the time, Acuff-Rose had a virtual monopoly on all the best songs and songwriters in the music business, especially for the type of music The Everly Brothers played. The duo’s access to the Acuff-Rose catalog is one of the reasons they were so commercially successful, and the falling out with Wesley Rose meant they no longer had access to ‘A’ list song material.

But both Don and Phil Everly were songwriters as well, and wrote many of their own songs. However in a strange twist of fate only fit for Music Row, because the brothers were still signed to Acuff-Rose as songwriters, the falling out with Wesley Rose meant that the brothers lost access to their own material as well, and any material they may write in the future. Though The Everly Brothers as performers were free to do what they wanted, Don and Phil Everly as songwriters were still under the thumb of Acuff-Rose. A publishing house that had been set up to protect songwriters, like many of Music Row’s institutions, had become corrupted from money and music business politics.

So The Everly Brothers tried to implement a work around. They began recording cover songs, and started writing under a collective pseudonym of “Jimmy Howard.” However when Acuff-Rose sniffed out what was happening, the publishing house brought legal action against the brothers and obtained the rights to those songs as well. Between 1961 and 1964, one of American music’s most brilliant and popular bands was resigned to singing cover material, and their popularity plummeted. The brothers tried to set up their own record label, Calliope Records, to record solo projects under. Once again Don set up under a pseudonym, “Adrian Kimberly,” while Phil started a group called the Keestone Family Singers with powerhouses Glen Campbell and Carole King. But both projects were unsuccessful, and Calliope Records was shuttered by the end of 1962.

Ultimately, the falling out between Wesley Rose and The Everly Brothers cost the duo their popular careers. Though the brothers would go on many more years in the music business both as solo performers and with each other, they never came even close to their late 50’s, early 60’s prominence. Even worse, the legal and financial issues created a strain between the two brothers that in many ways would last the rest of their lives, all the way up to the death of Phil Everly.

The tragic demise of The Everly Brothers spurned by the blacklisting from Acuff-Rose is a narrative that has played out many more times since the 1960’s, and speaks to similar practices that still transpire on Music Row today. Acuff-Rose is now known as Sony ATV.

On hearing of the death of his brother Phil, Don Everly told The Associated Press, “I was listening to one of my favorite songs that Phil wrote and had an extreme emotional moment just before I got the news of his passing. I took that as a special spiritual message from Phil saying goodbye. Our love was and will always be deeper than any earthly differences we might have had.”