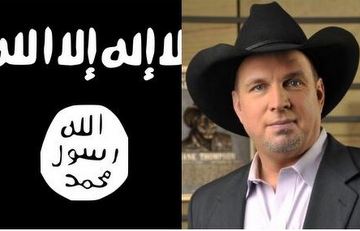 Radical Muslim terrorist organization ISIS has been conducting a brutal and bloody holy war in the Middle East in recent months, complete with genocide and mass slaughter as it attempts to form a cross-border caliphate in Syria and the northern portions of Iraq. The organization’s campaign of terror has included the decapitation of two American journalists in recent weeks in an attempt to deter American airstrikes against their strongholds, and to instill global fear about ISIS’s brutality and reach.

But where airstrikes, drone attacks, and diplomatic resolutions in recent weeks failed to weaken the resolve to the radical ISIS Islamists, the release of Garth Brooks’ first single since his 13-year retirement called “People Loving People” has apparently landed the resoluteness of ISIS a fatal blow. Reports out of northern portions of Iraq and Syria currently under ISIS control are of desertions in the thousands by ISIS fighters after they heard Garth’s song touting the virtues of love and peace.

Apparently the supreme leader of the organization, Abu Bakr al-Baghdadi, is a big Garth Brooks fan.

“Yeah, back in the 90’s it was more of a guilty pleasure at first, and then when he started flying out across stadiums like Peter Pan, and then the whole Chris Gaines thing—I mean seriously, what the hell was that?—I was like ‘Bye bye Garth,'” says al-Baghdadi. “Really, I’m an old-school country fan. Love me some Waylon.”

But like many older country fans, as modern country music has become more pop and even rap, al-Baghdadi’s feelings on Garth began to turn around. “Florida Georgia Line and Luke Bryan, are you kidding me? That crap’s unfit for human consumption. Compared to that garbage, Garth is as old-school country as it gets, and when I heard he was finally releasing a new single, I couldn’t wait to hear it.”

Apparently Abu Bakr al-Baghdadi put out a directive across the entire ISIS communications network to broadcast the song to the caliphate and all ISIS fighters as soon as it was released. By all accounts, it was a big hit with both the brass, and the rank and file of ISIS. “Let’s face it, it’s catchy as hell, and with a good message,” says al-Baghdadi. “Though damn, why did they have to bury his vocals so much in the mix? Trying to make out the words is like trying to subjugate a town of ethnic minorities with one arm tied behind your back.”

“You know, just like many of my ISIS fighters, the message of Jihad was drilled into by brain for 20 years in the most radical of Middle Eastern madrases, and was then solidified by spilling the blood of infidels for many years in battle. But I’ll be damned if Garth Brooks didn’t make me see things differently. ‘People Loving People’ is just so simple and eloquent, and really relevant to this day and age.”

According to The Pentagon and commanders of the Kurdish Peshmerga army in control of parts of their semi-autonomous region in Northern Iraq, pockets of ISIS resistance still exist. But instead of dropping bombs on the remaining ISIS positions, a plan is being put in place to continuously broadcast Garth’s “People Loving People” in those regions to weaken the remaining strongholds. “We’re still working out rights with Garth to be able to legally broadcast it in a public forum,” says Pentagon spokesperson Herold Frankenfurter. “He wants to make sure it doesn’t compete with his upcoming concert appearances, and Garth refuses to release the individual track to us digitally. He insists we have to wait for the entire album to be released.”