It’s Taylor Swift vs. Kanye West All Over Again (The Scourge of Celebrity) 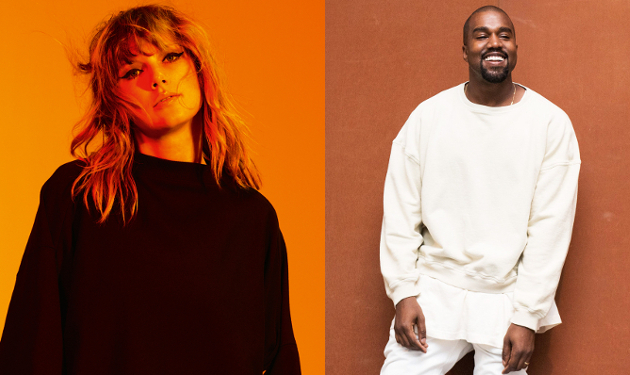 Isn’t celebrity pop culture influencing voter habits how we got here in the first place? If you’re waiting for marching orders from your favorite pop star to figure out who to vote for, you’re uniquely unqualified to be voting in the first place, just as most pop stars and celebrities are uniquely unqualified to be attempting to advise the public on political matters.

I’m about as inclined to vote for whomever Taylor Swift endorses on Instagram between photos of her cats as I am to take under advisement the inane ramblings of Kanye West about how to feel about the President of the United States minutes after he pranced around a stage in a water bottle.

Fuck all this shit. People wonder why we have a reality TV Star as President, and why the President acts like a reality TV Star? Well you have your answer. This isn’t politics, this is a celebrity popularity contest, no different than The Voice or American Idol or Celebrity Apprentice, with legions of Stans warring to push their favorite pop star to the top spot. Celebrity in Chief.

Political fights for favored candidates and pet issues have become no different than the vacuous back and forths between Blake Shelton fans and Miranda Lambert fans, Mariah Carey fans and Jennifer Lopez fans, fraught with the same diseases of the mind and unhinged perspectives, with the truth and facts left in peril. People aren’t infuriated because any actual rights have been stripped from them. They’re infuriated because their favorite celebrity or pet cause célèbre didn’t win. Americans have bought so deeply into the cult of celebrity and certain political issues, they can no longer separate their own identity from them. It’s a strange, disturbing confluence between the Stan culture and inexorable groupthink. This is no longer punditry, this is mindless tribalism devolving into group identity, aided by the carcinoma of identity politics.

Politics is now like a video game, with social media and smartphones delivering a similar button-pushing interface, and parallel dopamine responses when points are awarded for your team, while we tell ourselves that matters of nominal consequence hold the entire balance of civilization in sway like it’s World of Warcraft. Technology has gotten one over on us.

And no, this isn’t a “shut up and sing” argument. I would take up arms for the right of Taylor Swift, Kanye West, or anyone else to get swept up in the contagion of mental illness-inducing political fervor, and spew irresponsible platitudes such as how someone must be against minorities, women, and the LBGTQ community simply because of their political affiliation, or tell people “try and love” while wearing a cap they purposely wore to piss everyone off. And somehow the opinions of these celebrities matter more than the rest of ours because pop culture has surreptitiously elevated them onto an undeserved pedestal. Arguably nobody has benefited more from the skewed priorities of out celebrity-worshiping society than Kanye West and Taylor Swift, talented as they may be, or not.

And why exactly are we so angry at each other in America? Unemployment is at its lowest level in 49 years. Unemployment for minorities is at its lowest level in history. Were enjoying the longest bull market in a quarter century. The United States is at relative peace compared to recent history. And despite the characterizations of the insidious, exploitative, and opportunistic media trying to squeeze every last vestige of commercial viability out of an outdated business model before its absolute implosion occurs, crime is down, rape is down, sexual harassment is down, complaints against police are down, and the perpetrators of systemic sexism are being paraded out in the street, and tarred and featured like never before. Even murder is down, despite the increase of mass shootings. Why mass shootings? Because now more than ever people want to go out as celebrities, with their face splashed all over popular media. And popular media is more than happy to oblige, while politicians sweep in to exploit the tragedy for political expediency.

Despite the prosperity and unparalleled equality we’re experiencing, we’re more miserable than ever. Because the media and the political class want us to be. It’s good for business. It’s what keeps the clicks coming, and the donation coffers flush. So we fear each other like never before, and feel the need to bring matters that used to be kept at home out into the open, and act like people who think different from us lack even the most basic elements of human compassion, and don’t deserve our respect.

But that’s okay, because celebrities will save us from this madness. Taylor Swift. And while we’re at it, let’s get Oprah Winfrey to run for President. Or maybe Kanye West. What’s The Rock up to these days? Is he a Democrat or a Republican? Hey, he likes Cody Jinks so I guess that means I’ll be voting for him.

Somewhere America lost touch with the fact that politics works best when it’s incredibly boring, and that it’s a virtue to never think you’re better than someone else. No act of government will ever be able to change your lot in life more than what you can do for yourself. Perhaps Idiocracy isn’t when we all become stupid. Perhaps it’s when even the smart among us fall for the idea that we must root for the demise of people who think different from us simply because we’ve become too emotionally enraptured in the outcome to see that we’re all way more similar than different.

With abundant riches, ample free time, and incredible prosperity, we’ve decided we need to devise and invent a new set of problems for ourselves. With no clear and present enemies, we’ve made enemies with each other. Because we love the fucking drama, despite professing to be enraged by the other side. We have our noses covered in it, like reading the tabloid smut about the celebrities we love to hate. If the drama left our lives, we would miss it, and figure out a way to create more of it.

That doesn’t mean there still aren’t serious issues swirling out there in society that must be addressed, and that sometimes an act of government is the only way to do so. But if even the individuals tasked with entertaining us feel the need more and more to enter the political fray as opposed to helping to be the pressure valve and escape to get our minds away from all of the acrimony that is leading to record levels of mental illness and suicide, then perhaps we truly are living in dark times. But don’t fool yourself into thinking you know who the culprit is, and that it’s the people on the opposite side of the political spectrum, or even the pop stars tasking us to choose sides. Because the true culprit, and the true party of blame is ourselves.