Songwriter and Texas music wildman Jack Ingram has a new album on the way called Ridin’ High … Again due out April 26th on his own Beat Up Ford Records. It will be Ingram’s tenth studio record overall, and was recorded at Austin, TX’s iconic Arlyn Studios in just two days in what Ingram describes as one “forty-eight hour party.” Famed Austin musician Charlie Sexton participated in the recording process on guitar along with other personnel. It’s the follow up to Ingram’s 2016 album Midnight Motel, which was nominated for Saving Country Music’s Album of the Year.

Ridin’ High … Again has both new material from Jack Ingram, and ample cover songs from some of his Texas music heroes, along with other tributes. The title itself is a tip of the hat to Jerry Jeff Walker’s 1975 record Ridin’ High, which followed up his well-known Viva Terlingua! classic. Consider the record Jack Ingram re-connecting with his Texas roots, including covering Guy Clark’s “Desperados Waiting For A Train,” Kris Kristofferson’s “Jesus Was a Capricorn,” Willie Nelson’s “Gotta Get Drunk,” Rusty Wier’s “Don’t It Make You Wanna Dance,” and Hayes Carll’s “Down The Road Tonight.”

Ingram also wrote numerous original songs for the new album, including co-writes with Jon Randall Stewart and Todd Snider. It will also include his rendition of the song “Tin Man” that Ingram co-wrote with Miranda Lambert and Jon Randall, and Lambert went on to earn two CMA and two Grammy nominations for, and that ultimately won the 2018 ACM Song of the Year. The win saw Jack walk away with a trophy himself, and national face time as he spoke during the acceptance. It was Ingram’s 2nd ACM after he won Best New Male Artist in 2008.

After nearly a decade on smaller labels, Jack Ingram signed to Big Machine in 2005, and released two records for the company. But as is regularly the case for many Texas country artists, the relationship didn’t work out exactly as planned. Ingram’s last record Midnight Motel dealt with themes of re-connecting with himself and the right priorities. It was released 7 years after his last major label record, and symbolized his returning to the independent realm in Texas. 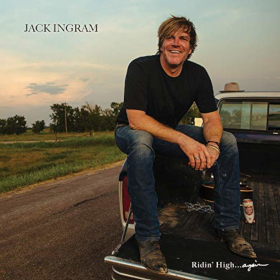 Both Igram’s cover of “Desperados Waiting For A Train,” and a Willie Nelson tribute called “Where’s There’s A Willie” have been released ahead of the new record (listen below). Ridin’ High … Again is now available for pre-order.