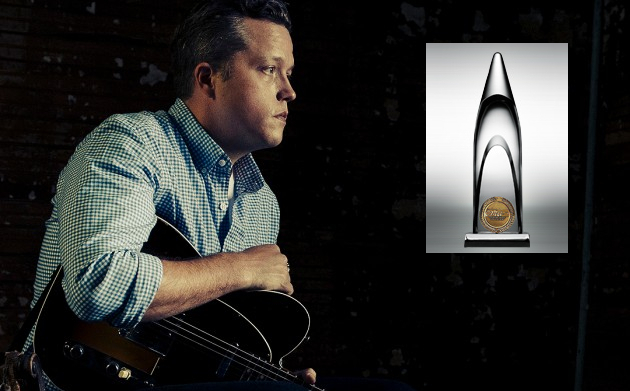 Another glass ceiling has just been shattered in mainstream country music’s monopoly on the independent side of music. Jason Isbell—the former member of the Drive-By Truckers and a well-decorated songwriter from Alabama who’s been setting the pace for sales and accolades in independent roots music—has just been nominated for Album of the Year by the Country Music Association, or CMA’s, for his most recent album The Nashville Sound. This is a virtually unprecedented feat for an independent artist. The album was produced by Dave Cobb, and was recorded with his backing band, The 400 Unit.

Already a recipient of multiple Grammy Awards in Americana, as well as two #1 album accolades for sales, Isbell now sticks his foot through the mother of all doors holding back independent artists, that being Music Row’s well-ordered awards system that very rarely pays attention to the accomplishments of independent music. Isbell is a signee to the independent record distribution company Thirty Tigers, which allows artists to own their own record labels, and keep control of their masters.

For the last few years as independent music continues to gain in market share, we’ve been waiting to see if mainstream awards like the CMA and the ACM’s would take notice. Perhaps Sturgill Simpson, who is the current owner of the Grammy for Album of the Year, was a little too hot to handle for the industry. But Isbell’s nearly universal acceptance as a critical favorite, as well as a serious commercial force (he just sold out six consecutive nights at the Ryman) has made mainstream Nashville incapable of ignoring his accomplishments anymore.

Whether Jason Isbell wins or not, the designation is significant. As we’ve seen over the last couple of years with Chris Stapleton walking away with both CMA and ACM Awards, when these more critically-favored artists receive nominations, it’s not out of the question the industry will vote their conscience, and they could win.

Jason Isbell should be considered a serious contender for the award. It also opens the possibility of other independent artists receiving nominations in the future. Now that the levee has finally been breached, who knows who could be nominated in the coming years. In the modern era, the only other time we have seen an truly independent artist nominated for a CMA is when Brandy Clark was nominated for New Artist of the Year in 2014 before she signed to Warner Bros. Records.

The Album of the Year nominations are as follows:

With Miranda Lambert receiving consideration for The Weight of These Wings, and Chris Stapleton for From A Room: Vol. 1, it gives multiple album for people who care about quality music to root for. Jason Isbell is also gearing up for the Americana Music Awards in Nashville on Wednesday, September 13th, where he’s been know to collect quite a bit of hardware over the years.

The CMA Awards are on November 8th on ABC.