Jesus Drop Kicks Paul Craft (Through The Goalposts of Life) 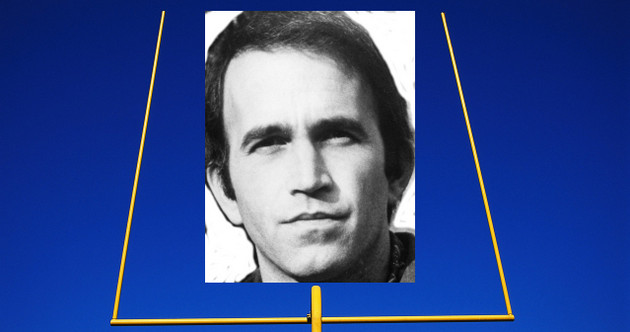 You press most any theologian, and they will expound upon the theory that God has the most profound sense of humor … if you just know where to look for it. Whether this was in play when country music songwriter Paul Craft decided to write the song “Drop Kick Me Jesus (Through The Goalposts Of Life),” whether it was more centered upon a social commentary about the state of religion in America where the most holy of days is decidedly overrun by the dominance of the National Football League, or whether the song was meant to mean different things to different people—like most great songs are—it tickled the funny bone and said something profound that could have never been communicated through any other medium than humor.

Time Magazine once said that the song “sounds like a writing assignment by an eighth-grader who has just learned about metaphors.” But what do those pointy-nosed intellectuals really know about country music, and the legacy of wry humor that was personified in artists like Roger Miller, John Hartford, and Shel Silverstein? Don’t they know Johnny Cash’s biggest hit of all time was “A Boy Named Sue”? That song won the Grammy for Best Country Song in 1970. “Drop Kick Me Jesus” was nominated for a Grammy seven years later when country music performer Bobby Bare released it in 1976. Only seems right for the world’s only Christian football waltz.

Make me, oh, make me, Lord, more than I am
Make me a piece in your master game plan
Free from the earthly temptations below
I’ve got the will, Lord, if you got the toe.

Songwriter Paul Craft might be perturbed by the idea of a novelty song defining his career, or perhaps he’d laugh. But his contributions to country music go much farther than you average songwriter’s field goal range. Just this week, Saving Country Music published a list of The Greatest Hank Williams Tribute Songs of All Time, and right near the top was Paul Craft’s “Hank Williams, You Wrote My Life,” recorded by Moe Bandy. Craft scored a #1 in 1991 by way of Mark Chesnutt’s recording of “Brother Jukebox.” And another country music artist known for his comedic leanings, Ray Stevens, cut Craft’s humorous song “It’s Me Again, Margaret” in 1984.

Paul Craft also penned a number of famous bluegrass songs, and he wrote nearly all of his songs by himself. In the liner notes of one of his own albums, Craft once asserted, “Back then you didn’t need to tell anyone you wrote a song ‘by yourself.’ This was before the current Nashville practice of ‘co-writing.’ Some of the reasons for this activity I can only guess at. But I can’t help feeling that if Ernest Hemingway had been forced to ‘co-write’ ‘The Sun Also Rises,’ it wouldn’t be the same book and that would be a shame.”

Any great humorist will tell you that one of the vital keys to the craft is timing. And timing is many times where you can spy the work of the divine. In the 4th quarter of of Paul Craft’s life, with the final seconds ticking down and the game on the line, the Nashville Songwriter’s Hall of Fame lined up for a field goal, split the uprights, an made Paul Craft a winner when they inducted him into the institution on October 6th, 2014. Less than two weeks later, on Saturday, 10-18, when much of America was sitting on their couches enjoying the college version of the American pastime, Paul Craft quietly passed away in Nashville after slowly failing health over the past few years. He was 76-years-old.

Paul Craft was not the household name some of his songs made of more famous performers, but both his humor and his heartfelt sentiments remain both endowed in the hearts of listeners, and as relevant (and grin-inducing) as ever.

Drop-kick me, Jesus, through the goalposts of life…