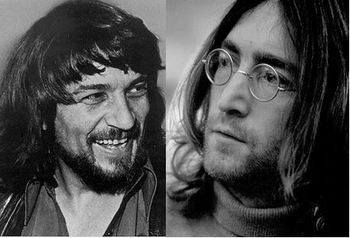 On October 5th, Guernsey’s Auctions will be liquidating a massive 2,000-piece collection of items owned by Waylon Jennings from his Arizona estate. Though there are many items of intrigue to be sold off, one of the most curious might be the letter John Lennon once wrote to Waylon Jennings. Representing such a clashing of music worlds, this artifact of popular music is one of the few insights we have into men that spent most of their lives trying to protect their privacy and wearing their personas like armor.

The letter first surfaced in the public eye in the glossy photo section of Waylon’s 1996 autobiography with Lenny Kaye. No explanation, and no context for the letter was given, simply the caption of, “A Beatle writes…” Beyond the natural curiosity the letter creates from being between two megastars who on the surface would seem to be polar opposite personalities, the hilarity Lennon embedded throughout the letter makes it especially enriching. Waylon Jennings and John Lennon were not as far apart as one would think, or as even the two stars thought themselves when they first met at the Grammy Awards in New York.

For starters, Waylon and John had a “Buddy” between them. Buddy Holly was a big influence on The Beatles during the British band’s early stages, and Waylon did time as the bass player in Buddy Holly’s backing band “The Crickets” when the two original members took a break. The name “The Crickets” by many accounts is what directly inspired Lennon to call his band with Paul McCartney “The Beatles,” (McCartney was responsible for changing the ‘e’ to an ‘a’). The first song John Lennon ever recorded with Paul McCartney and George Harrison was a cover of Buddy Holly’s “That’ll Be The Day.” It was also Waylon who gave up his seat to The Big Bopper on that fateful plane that crashed in 1959 in an event that later became known as “The Day The Music Died,” taking the lives of the Bopper, Buddy Holly and Ritchie Valens.

But when John Lennon met Waylon, Buddy Holly was not what was on his mind, and it wasn’t on Waylon’s either. As revealed in a 1996 interview with Waylon by Terry Gross, both stars had the other pegged incorrectly before they met. “I met John Lennon, and I – you know, we were cutting up and everything at one of the Grammy things,” Waylon recalls. “And I said, ‘Man, you’re a lot of – you’re funny. I didn’t know you were funny,’ I said. ‘I thought you were some kind of mad guy or something like that.'”

This explains in part the humorous tone Lennon took with the letter.

When it came to how Lennon perceived Waylon, it was even more off the mark.

As much as Waylon’s reputation in the United States was one of a rough and tumble country music Outlaw, in the U.K. it was even more so. During an early studio session in Waylon’s career, he was recording at RCA in Nashville when he brought a gun into the studio to make a point about RCA’s session players playing “pickup notes.” Waylon didn’t feel like session players played with any feeling to their music. They were great players, but after playing on so many different recordings each day, they lacked the type of imagination and creativity Waylon wanted on his records. This perception of session players was later one of the foundations for the Outlaw movement, but while Waylon was still under the thumb of RCA, he had to do whatever he could to get the session players to play with feeling.

So during one studio session, Jennings brought a long-barreled Colt Buntline revolver with him and proclaimed, “The first guy that I hear use a pickup note, I’m going to shoot his fingers off!” Though the session players themselves probably took it mostly as sarcasm, some British journalists who were in the studio observing the session at the time didn’t have the same handle on American custom or Waylon’s personality. After their reports of Waylon carrying a revolver into the studio were published, Waylon’s Outlaw reputation in Britain only grew more menacing.

So when Waylon said to John Lennon at The Grammy Awards, “I thought you were some kind of mad guy or something like that,” Lennon’s response was, “Listen, people in England think you shoot folks.“

All indications are Waylon Jennings and John Lennon hit it off like peanut butter and jelly. Though the letter itself does not shed much light on when they met (the date Lennon gives is “MARCH SOMETHING (year of our ford),” though it does say “75 etc.” below), they likely met on March 1st, 1975 at the Uris Theater in New York City during the year’s Grammy Awards. Waylon was up for Best Country & Western Vocal Performance for his song “I’m A Ramblin’ Man,” and Lennon was a resident of New York at the time.

The letter seems to be prefacing Lennon sending Waylon a song or songs he wrote but never released. From misspelling Waylon’s first name (and correcting it with pen), to Lennon’s Liverpool accent coming out in his typing (“TWAS GOOD TA MEETYA”), to the self-portrait squiggle of his own visage, the John (Lennon) letter to Waylon may offer as much insight into the true personality of the legendary Beatle than any other artifact he left behind on this mortal coil. And it’s one that is given special meaning because of who it was sent to. 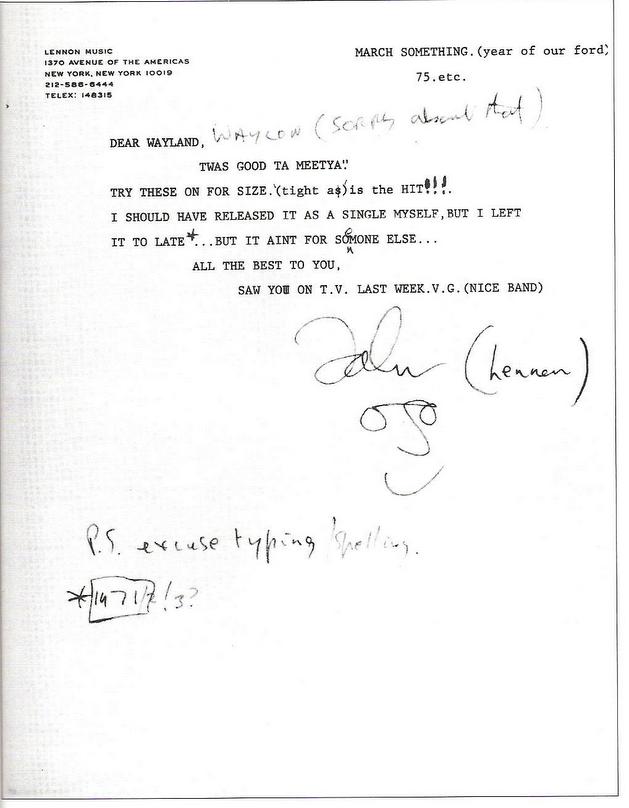