Life is a strange thing. Most of John Prine’s songs are about that very topic. It’s been a weird, winding road for the legendary songwriter following the winding narratives of often weird songs from open mics in Chicago in the late 60’s, to now being considered one of the current living patron saints of Americana music. Few would dispute the accolades gravitating towards Prine in the here and now, or not count them as long overdue.

In the absence in the mortal coil of Guy Clark, and with Townes Van Zandt long passed as well, John Prine is the preeminent songwriter that sage acolytes of the craft look up to. He’s strangely a hot name at the moment, touring Ireland and playing late night TV shows with Sturgill Simpson, being talked up by Jason Isbell, and getting a personal display in the Country Music Hall of Fame. And the fact that Prine himself seems to be perfectly ignorant to his preeminence, or why all the hubbub is being made about him now in his 71st year of life, makes it all that more joyous to witness.

Johnny Cash received the opportunity to rise out of the late-career obscurity that most music artists face at some point in their timeline to experience a resurgence of interest before his passing. Willie Nelson is experiencing that same bounty as we speak. But Waylon Jennings never received that chance, passing away on the downside of his career arc. Townes Van Zandt and Blaze Foley died in virtual obscurity, only to be remember fondly in hindsight many years later. So music fans shouldn’t be shy about celebrating John Prine’s accomplishments and singing his praises while he can still smell the roses placed at his feet. And that’s the reason that among other things, John Prine is the reigning Americana Music Association’s Artist of the Year.

Some proclaim Americana music as a pasture for aged-out country artists and songwriters to retire to. That’s one way to look at it, but another is that unlike the ageist and shortsighted mainstream country world, Americana reveres its elders, and elevates them in accordance with the wrinkles of wisdom furrowing their brow and the contributions they’ve brought to the table, instead of being quick to pass them by for the next hot thing unproven in quality or in longevity of appeal. The appeal of John Prine passes through generations, and has been steel tested by time. 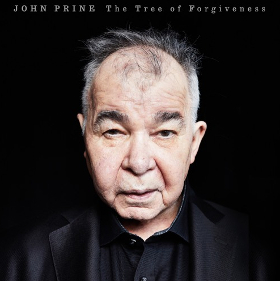 John Prine’s new album The Tree of Forgiveness is no victory lap. This isn’t Prine resting on his laurels, soaking up embellished praise simply from the weight of his legacy as he coasts into the twilight of his life, cashing out with old cobbled together recordings left on the cutting house floor from previous sessions. His first album of all original songs in 13 years includes those same little sparks of magic and charm that keep his back catalog fresh after all of these years, and make you infinitely happy he’s still around and kicking out songs.

John Prine writes kids songs for adults. His whimsical tales enhanced with tiny observances of life’s perfect little details are like treasure troves of wit, hiding a deeper wisdom that helps breed understanding of larger meanings, sugar-coated so they go down easy, but with all the potency of the most powerful odes.

The Tree of Forgiveness bestows ample new reinforcements for those moments you find yourself in a John Prine mood. “Egg & Daughter Nite, Lincoln Nebraska, 1967 (Crazy Bone)” could make a concrete statue crack a smile, “Lonesome Friends of Science” has the ability to eradicate the fear of death in under 5 minutes, and the playful “When I Get To Heaven” never made dying sound so fun. Taking the biggest foreboding questions of life and boiling them down to affable pleasures is the magic John Prine is able to spin with words, while never being too self-absorbed to deliver a sweet, reminiscent love song if it fancies him. John Prine has the unique gift to melt anxieties, and make life’s mundane moments seem special.

John Prine could never sing especially well, and time hasn’t helped him in that department. But that’s not why you listen. Dave Cobb handling producer duties in this instance was a good choice, since he’s a master of knowing how to get out of the way of a song, give it minimal drum and shaker treatments and a little guitar, and then move on. Sometimes you’re worried Prine needs a little bit more help with tunes, like at the beginning of the album’s first single, “Summer’s End,” where the initial moments feel breathy and struggling. But as the strings (or Mellotron) build in, the magic and emotion is brilliantly revealed.

Brandi Carlile, Jason Isbell, and Amanda Shires also appear on the record, but never so much where they get in the way of Prine or the song. They add a little harmony, and then step aside. Prine also wasn’t afraid to work with a few other songwriters, including Dan Auerbach, Keith Sykes, Phil Spector, Roger Cook, and Pat McLaughlin to make The Tree of Forgiveness worth the hassle, and not come out of the oven half baked, despite the purposeful minimalist approach of the production that at times cuts out to Prine just talking.

Put John Prine in that distinct category of performers that future generations will marvel that you got to see while they were still alive—a legend of music, even if he never filled arenas, or found himself at the top of the charts. That was never the point. The point was the song. And perhaps the cruel critics, which Prine calls “syphilitic parasitics” in the album’s final song, understand, and are serving John Prine his due. Finally.

Purchase The Tree of Forgiveness from Oh Boy Records

Purchase The Tree of Forgiveness on Amazon