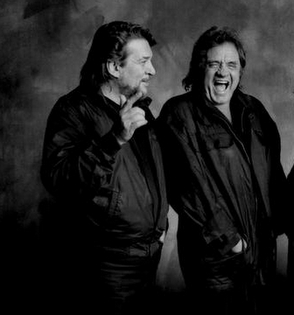 It was November of 1985. Waylon Jennings and Johnny Cash—long-time friends who traced their intertwined stories all the way back to when they shared an apartment together just outside of Nashville—were as close as ever, and sharing the stage as part of the supergroup The Highwaymen with Willie Nelson and Kris Kristofferson. The song “Highwayman” had been one of 1985’s biggest hits, cresting at #1 and holding on the Billboard charts for 20 weeks on its way to becoming a Top 5 song of the entire year.

Amidst their success, Waylon had agreed to be a part of a “roasting” in Georgia to benefit the Spina Bifida Association of Atlanta, and all of his fellow Highwaymen, including Johnny Cash and his wife June Carter Cash were scheduled to attend. Reporter Jack “Hawkeye” Hurst wrote briefly about the event on November 28th, 1985, and placed Johnny and June in Atlanta with Waylon, because that is where they were supposed to be according to the billing. But in truth Johnny and June were not there; they were in Jamaica. The Cash’s had a home called “Cinnamon Hill” on the Caribbean island which Waylon and his wife Jessi often visited, and while hiding away in their Jamaican home, Johnny and June missed the Atlanta roast. How do we know this?

As part of the liquidation of Waylon’s Arizona estate currently underway, a letter from Johnny Cash to Waylon has been made public for the first time. To make it up to Waylon for not attending the roast, Johnny Cash (or someone on his behalf) took to a typewriter, and in the spirit of a proper roasting, wrote a letter to Waylon that was equally apologetic for missing the event as it was pointedly sarcastic toward his old friend.

The Johnny Cash letter to Waylon Jennings is a testament to the friendship and closeness the two men shared, and the respect each man felt for respective wives.

The letter, along with hundreds of personal effects, including reams of other written paper matter, is scheduled to be auctioned off by Guernsey’s Auctioneers on Sunday, Oct. 5th.

Waylon, this roast shouldn’t hurt you too much tonight, because your brain is already fried. Seriously, I wanted to be there so bad, but I have been told that the only way to get from Jamaica to Atlanta is to travel. I sincerely hope you will accept this honest reason. We miss you and Shooter. Did you ever find out who Shooter’s mother is . . . . . I love you, Jessi, don’t I June? Jessi, you are one of the few truly great women I have met in my entire life. As soon as we get home, we want you to find Waylon’s clothes that he is going to wear that day, then show him where the car keys are, and come to see us. Waylon, I love you, don’t I God? Just remember if you’re ever down to your last dollar, if all your old friends turn their backs on you, if you’re so low that you wish you could die, just remember, I’ll always be . . . . . . . . . 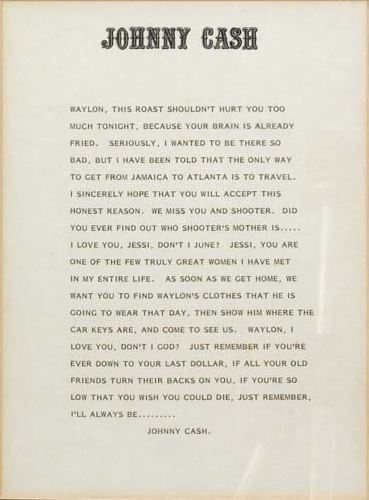