Last week when I posted a link to Johnny Cash’s American Recordings Outtakes I posted a sign of Johnny shooting the bird. Not the first time I’ve posted that picture, but after some inquires and a few conversations over it, it’s come to my attention that maybe the story behind Johnny Cash’s middle finger is not as well-known as I’d thought.

That sign specifically comes from the Cash-themed restaurant/bar/venue The Mean Eyed Cat in Austin, but it is an artists rendition memorializing a gonzo moment in country music history.

The finger photo itself was shot at a Cash concert in 1969 at California’s San Quentin prison by photographer Jim Marshall. The pose was the result of Cash’s response to the request: “John, let’s do a shot for the warden.” Marshall has since said it was “probably the most ripped off photograph in the history of the world.”

However the picture remained relatively obscure until 1998. At the time Johnny was working with legendary producer Rick Rubin on his American Recordings albums. Rick revitalized Cash’s career, introducing him to a new generation of fans spanning multiple genres. Commercially and critically the albums were successful. The second American album Unchained (included the song “Mean Eyed Cat”) won the 1998 Grammy for Best Country Album.

But could you hear Johnny Cash’s music on the country radio? Not so much.

Rick Rubin started his career as the DJ for The Beastie Boys, and later on went to work with groups like Slayer, Metallica, and Tom Petty. Rick had never dealt with being snubbed by radio, but when he took on his first country artist, he learned country was a different animal. Rubin called country radio a “trendy scene,” and decided to fire a shot right at Music Row.

Rubin dug deep and pulled out $20,000 to take a full page ad out in Billboard Magazine. The ad featured the famous Cash bird flipping, and the caption: “American Recordings and Johnny Cash would like to acknowledge the Nashville music establishment and country radio for your support.”

“We hope it will open the eyes of the country community and hopefully they’ll say, ‘The guy did win'” said Rick, “And he’s making records considered the best in country and maybe we should readdress the situation.

Willie Nelson loved the ad and hung it up in his bus. “John speaks for all of us. Everyone who comes in has to see it.”

George Jones loved the ad too and made one of his own to promote his song “Wild Irish Rose” showing George surrounded by basketballs, footballs and baseballs and the caption, “If radio had any, they’d play this record.”

“All of us older artists feel that way. Radio gives us one of the biggest insults there is when they don’t play our music. If no one is going to stick up for us, we’ll have to do it ourselves.”

The picture of Johnny Cash and his protruding middle digit has now become iconic, and can be found on T-shirts and stickers and all over the internet. I acknowledge that many like it simply for the rawness, but to me it symbolizes the struggle of REAL country artists. Many assert that traditional country fans don’t like modern pop country simply because it’s popular, and only like “obscure” country because it isn’t. Johnny Cash proved a few of important things:

1. Just because something is popular, doesn’t mean it is the best.

2. Country radio is/was out of touch with what people wanted and is showing no leadership, or as George said, “balls.”

3. Most importantly, and most dangerously for country radio, Johnny proved that you can be successful without country radio’s support. 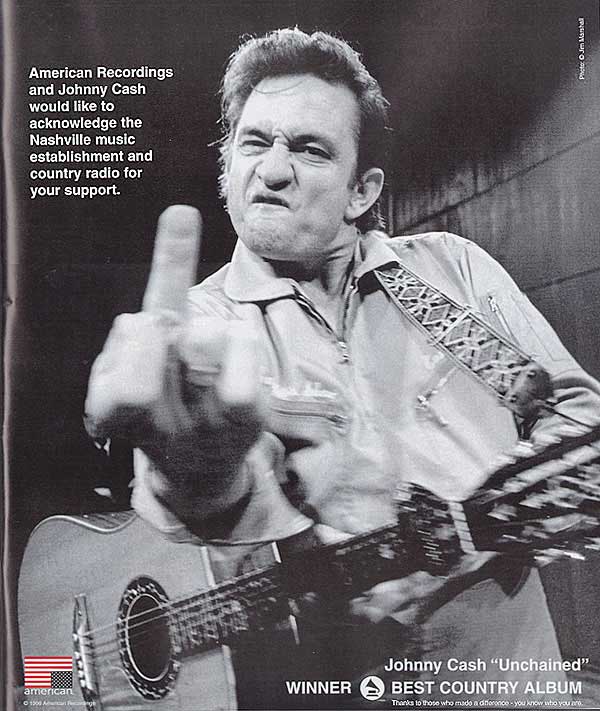 PS: If anyone has the George Jones “balls” ad, please send it along.