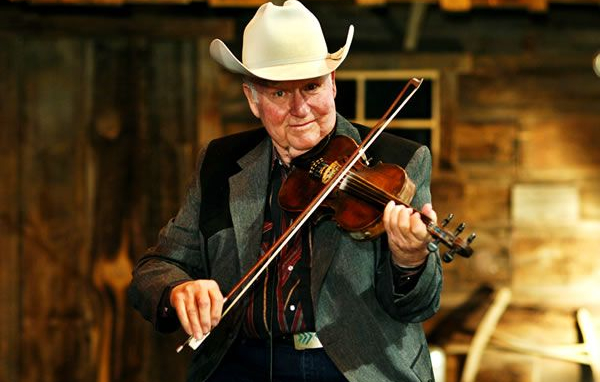 Fiddle legend Johnny Gimble is the newest inductee into the Country Music Hall of Fame. This was the news coming out of the press conference Tuesday morning (3-27) from the Country Music Hall of Fame rotunda, hosted by Garth Brooks and Trisha Yearwood. Gimble was inducted in the rotating musician category. He was the first of three new inductees announced. Dottie West has also been named as the newest Veterans Era inductee, and Ricky Skaggs was named as the Modern Era inductee.

Gimble passed away on May 9th in 2015. His son Dick, and his granddaughter Emily were there to accept on his behalf. They performed a song in tribute.

John Paul Gimble was born in Tyler, Texas on May 30th, 1926, and grew up in the nearby community of Bascom. Playing fiddle in bands since age 12, Gimble first appeared with his two brothers Bill and Jack in the Rose City Swingers before moving to Louisiana and playing fiddle for Jimmie Davis. Gimble eventually joined Bob Wills full time in the late 1940’s after Wills discovered Johnny while he was playing in a band called the Rhythmaires. Johnny became a member of the most legendary lineup of the Texas Playboys. Gimble also fronted his own band from 1951 to 1953 that played as the house band at Bob Wills’ “Ranch House” club in Dallas. Gimble also appeared on the Marty Robbins #1 hit, “I’ll Go On Alone.”

By the late 60’s Gimble was a sought after session player, and played on Merle Haggard’s Bob Wills tribute record, and recordings from Chet Atkins. Gimble also played mandolin in both live and studio sessions. He was also known for being one of the very few five-string fiddle players—adding an extra lower string to hit lower notes.

Johnny Gimble’s most high-profile position may have been as a member of the Million Dollar Band—an All-Star group of session musicians that most notably appeared on the television variety show Hee-Haw. He also toured with Willie Nelson as his fiddle player from 1979 to 1981 after moving from Nashville back to Texas, and in 1983 assembled a Texas Swing group that featured Ray Price on vocals that had a hit with the song “One Fiddle, Two Fiddle” after the song was featured in the Clint Eastwood move Honkytonk Man.

Gimble was nominated for a Grammy for appearing on Mark O’Connor’s Heroes album from 1993, and made numerous appearances on Austin City Limits in the 90’s and 2000’s. A good friend of Western Swing revivalist Ray Benson and his band Asleep at the Wheel, Johnny Gimble has appeared with the group many times. He also was awarded the Academy of Country Music’s Fiddle Player of the Year awards nine times.

Johnny Gimble will be officially inducted into the Hall of Fame in a Medallion Ceremony later this year.