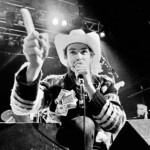 Saving Country Music’s recent review of Jonny Corndawg‘s latest album Down On The Bikini Line caused quite the stir, primarily from the accusation that his music was an extension of the ever-widening hipster culture. The approach of acknowledging the weirdness surrounding Jonny and his music instead of ignoring it, with the hopes of maybe helping folks who normally might be turned off by him to look beyond the imagery and focus on the music itself had very mixed results, concluding in some confusion and unresolved conflict.

So instead of letting the confusion fester, I sought out Jonny at SXSW last week to discuss him, his music, and hipsters, and how we could potentially bridge the understanding gap with his music. But Corndawg seems to have no desire to convert anyone, or for stereotyping his music or anyone else as “hipsters”. He just wants to make music for himself, and hopefully find the people that “get it”. His comments also helped shine some more light on the wider discussion about the destruction of the traditional country culture, and the appeal of “hipster” culture, and how both interface with people’s sense of community.

Download or listen to the 20-minute interview below, or find the meat of it transcribed below that.

Jonny Corndawg: I stay away from reading comments, except with your article, I was like “Well, what’s going on here?” because there were so many people talking about it. And usually if something is negative, I usually stay away from it because truly I just don’t care. I’m doing this for myself. Obviously I want this to succeed and I want to do this forever, but if everyone said “You suck, we don’t like you anymore,” then I’m still going to be doing this, I’m still going to be making leather stuff, I’ll wear a Toga and live out in the woods making these songs, that’s the way it’s always going to be. Whenever someone writes something negative, I get a kick out of it, because I do like raising questions and making people scratch their heads. Because shit man, you turn country music on the radio and it’s all just so obvious. They hear “I’m middle-aged and kinda fat” and they say “That appeals to me, that’s what I am.” So any time you can have someone say, “Hey wait a minute, where is this music coming from? Who is it for?” then I’m into that.

Triggerman: I have found very few people who have a problem with your music once they get past the imagery. Ideally it wouldn’t be about the imagery, it would be about the music and the imagery would just be a compliment to it. But with your music, that seems to be a common theme. Like you said, you hear criticisms often. When somebody calls you a hipster, do you agree with that?

Jonny Corndawg: Yes and no. I have some pretty heavy ethical stuff about hipsters. I think a hipster is someone you don’t know personally. Nobody says, “I’m gonna go hang out with my hipster friends.” If someone sees somebody with tight jeans or something, and if they knew them personally, they would say, “He likes those jeans. I don’t know why, I don’t like them.” But you would never call one of your friends something like that. It’s a negative thing that people have thrown against people that they don’t know. I think that’s wrong. Where I grew up in rural Virginia, I never ever fit in, I got in fights left and right, and eventually just dropped out of high school. I never had any friends, it just wasn’t my thing. I’ve been a hipster since the get go essentially, the kid who said, “Call me what you want, I don’t care.” At the same time there is that desire to explain yourself. As for the hipster thing, there’s nothing ironic about my music. The music is really just an extension of myself, my perception, and the pictures I want to be painted in song.

Triggerman: It’s not necessarily that you’re a hipster or that your music is for hipsters, I think it’s the use of irony a lot of people see implied in your music. And it could be that there’s such a permeation of hipster culture right now versus other cultures, that from the outside looking in it is easy to brand things as “hipster”, and that has created this culture war. So people look for these tell tale signs: irony, sarcasm, skinny jeans, big glasses, whatever, and they say, “That’s hipster-ism and I’m against hipsters.” There is a very reactionary element to this culture war. What I attempted to do in my review of Down on the Bikini Line was to get people to breathe through that reactionary moment. What would you say to people who look at your music and are having this reactionary response? What would you tell them about yourself, that may help bridge the misunderstanding?

Jonny Corndawg: I think I would say nothing at all. Either you get it, or you don’t. And if you really don’t like it, then eat shit. Because it’s not for them, it’s for me. It’s my thing. It’s the most sincere thing. I’m not trying to get a laugh, it’s just what comes out. I’m not trying to poke fun at anybody. There’s nothing else I’d least rather do. I don’t think there’s anything worse than making fun of people. I’m just painting the world the way I see it, and either you get it, and if you don’t, I have nothing to say to them. I’m not going to try and win anybody over, fuck that. I’ve got too much pride. 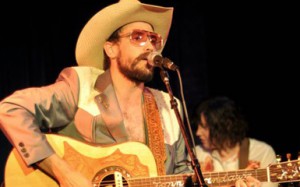 Triggerman: Can you see in the way that your music is presented, some of the lyrics, some of the lines, and that people could say, “Well, this guy’s poking fun at me.”

Jonny Corndawg: I think they’ve never heard Homer & Jethro. They’ve never heard Roger Miller. And I think they think that country music and country people are these hayseeds that have a bunch of honor and work in fields and stuff. Man, “country” is Wal-Mart culture. I grew up in the country, and nobody trusts their neighbors. Nobody does. They go to Wal-Mart and lock their doors. The only people who trust each other are the people who live in cities. Somewhere along the line, this shit has switched. The only people who know their neighbors and store owner’s names are the people that live in the big cities. People that live in the country are paranoid, they’re scared shitless, and they’re closed off. That’s where I came from, it’s not who I am. I’m not making fun of them, but I’m not trying to win them over because we’re not the same people and I don’t know that we’d be buddies. The people that come to my shows and get it, they get it because I haven’t tried to sell it to them. And if you get it, I know I could be friends with any one of them. When you appeal to too many people I think you get a little corrupt. So it’s not for attention or laughs or anything else, it’s for myself.

Triggerman: So going back to the country culture nowadays being “lock your doors, don’t talk to your neighbors”, and how people in the city are more open, when you talk about urban renewal and the gentrification that’s going on in parts of the country, and the hipsters, or young, white, educated young people usually from affluent backgrounds, they’re the ones on the cutting edge of this gentrification. They move into poor neighborhoods and they add culture and drop crime levels, the education levels boost in these areas and they promote local commerce, they bike instead of drive, and do all of this stuff to create local community. And you don’t see that in the country, you see Wal-Mart and megachurches that come and destroy that community. How do you think music and culture help create that dynamic, and how do you think your music fits into that dynamic?

Jonny Corndawg: I don’t think the music creates that dynamic, I think it’s a result of where it comes from. I feel like Roger Miller would be proud of me. He’s my favorite. So if I could win over Roger Miller. . .but I don’t think he would survive today. Of course he wouldn’t. Nobody would buy his records. So I just think it’s a different time. And people get pissed at Toby Keith, and I get pissed sometimes too, about being the “new country” but the people that listen to that are the people in the country. This is real country right now. This is the result of what’s going on in the country. They don’t want to hang out with their neighbors and go to some hayseed thing. They’re kind of embarrassed of that. They’d rather buy shiny new stuff. So I think it’s just a result of the change in times.

If someone from those megachurches would try and convert me, and I’m not anti-church or anything, but I just wouldn’t be happy ultimately, it’s not written in my life line. And I wouldn’t want to to try and convert them to like me because eventually it just wouldn’t work out. You know what, we’re different, and that’s cool, and that’s why I’m not going to try and win people over.

Triggerman: Do you feel like your music is a commentary of the decay of country culture?

Triggerman: You say a lot of folks don’t get it and you’re okay with that. But do you feel like you’re reaching those folks that do get it?

Jonny Corndawg: Absolutely, everyday. It’s exponential. When you hit somebody that really gets it, you just hit 20 or 30 more. I just want to meet everybody, you know? I just want to know everybody, especially people who are going to be on my team, and be like-minded.