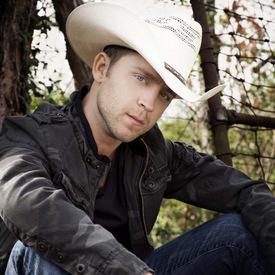 One of the big stories leading up to the Academy of Country Music Awards on Sunday April 6th has been the ineligibility of Justin Moore for the New Artist of the Year award that he’s nominated for, and is considered a front runner to win. Now Justin Moore has responded to the concerns, and the issue has gone all the way to making the front page of Fox News.

“It’s really exciting for us to finally get this monkey off our back,” he told Connecticut radio station 92.5. “I feel like forever I was the coach who could win games, but not the big one. Somebody asked me the other day what I felt about being up for ‘New Artist’ and my response was “I would take ‘Female Vocalist’ if they’d give it to me.’ It sounds kind of funny, but I’m kind of a country music history buff. Throughout the history of this award, people have won it well into their careers. [Kenny] Chesney won it five, six, seven years after his first album ”¦ so it sounds a little funnier than what it historically has, who’s won it over the years, so hopefully we’re the next one in line. We’ll see.”

On the surface, Justin Moore is right. Kenny Chesney, Eric Church, and others have won the ACM’s New Artist of the Year award many years after the initial start of their career. But that is not what is at issue. Despite their prior years of service, Kenny Chesney and Eric Church were both still eligible by the stated rules laid out by the ACM’s voter guidelines when they were nominated and won the award. Justin Moore is not.

Justin Moore, similar to the ACM President in his response on the issue, is trying to deflect from the core of the problem. It’s not only that Justin Moore doesn’t pass the eyeball test as a “New Artist” with his first hit single “Back That Thing Up” being almost six years old, it’s that there are specific rules governing which artists are eligible for the awards so that the integrity of the awards can remain in tact and impropriety cannot creep into the system. The ACM’s rules specifically state:

Unfortunately for Justin, his name is on two separate albums that can’t jump this hurdle: His self-titled Justin Moore album released on August 11th, 2009 that has been certified gold with 550,000 copies sold, and Outlaws Like Me released on June 21st, 2011 that has been certified gold with 577,000 copies sold. Any talk of where Kenny Chesney was in his career when he won the award, or how much Justin Moore might deserve it, are irrelevant. Furthermore, the stipulations of the ACM’s rules give the ACM President and Board of Directors the ability to change the rules if they wish, but they don’t give anyone the unilateral ability to break them. The New Artist rules have yet to be amended to reflect the realities of Justin Moore’s nomination, and even more inconvenient for the ACM is the fact that they set the precedent in 2009 when they changed the rules to make Jamey Johnson eligible for Album of the Year before the nominations were announced.

Read: Why The Best Fan Vote for the ACM’s Is No Vote At All

History buff or not, Justin Moore is still ineligible, and the Academy of Country Music still refuses to do anything about it. The sad part for Justin is, none of this is Justin Moore’s fault, though he may ultimately get stuck with the blame from some fans. Justin Moore, with two gold albums under his belt, probably does deserve some recognition from these top level awards that have ignored him for years. But it shouldn’t be at the expense of the rules that are set up to make sure the ACM process is one that is governed by clear statutes, one that resides above corruption, and one that is handled with transparency.