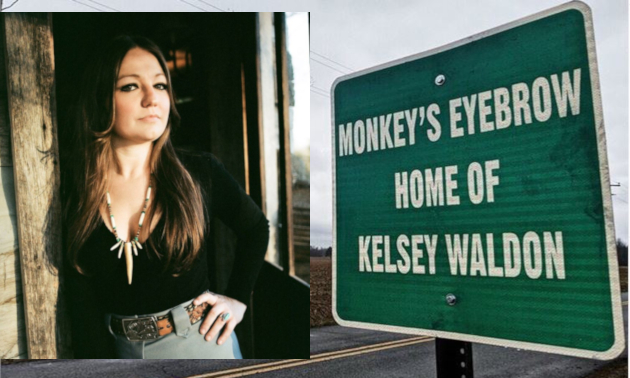 It’s a small, unincorporated region of Western Kentucky with a funny name, and it also happens to be the home of traditional country performer and Oh Boy Records signee Kelsey Waldon. They call in Monkey’s Eyebrow, and they recently decided to honor their hometown country music hero by erecting a sign at the edge of town.

“As a Kentuckian, I grew up seeing signs like this all over my beloved home state. ‘Home Of’ Merle Travis, Bill Monroe, Loretta Lynn, Keith Whitley, Ricky Skaggs, Dwight Yoakam, Patty Loveless, Tom T Hall, all of Country Music Highway 23′ and countless others,” Kelsey says. “Add this to the list of proud moments. Thank you Ballard County officials for making it happen. It means a lot.”

There’s a lot of theories how the town got it’s curious name, from the fact that Ballard County is shaped kind of like a monkey’s head, and Monkey’s Eyebrow is where the eyebrow would be, or that the shape of the town kind of looks like an eyebrow from a nearby hill, or that the local general store back in the day was only considered good enough for “a bunch of monkeys” and the name stuck. Either way, they’re proud that Kelsey Waldon is from there.

“She’s recently done so much, and been recognized on CMT and different things, and her being part of the community, the court thought it would be good if she was recognized by putting a sign up,” Ballard County’s Angela Van Cleve tells Saving Country Music. “In the past we put a sign of for a girl who won Miss Kentucky, so we thought it was only fitting for Kelsey to get her recognition as well. People are even coming down to Monkey’s Eyebrow to see where she’s from.”

A court of five magistrates brought up the issue on January 7th, and made a motion to have the sign commissioned. It didn’t take long for the sign to get made and posted right at the limits of the little community.

Kelsey Waldon’s latest album White Noise/White Lines was released on October 4th, 2019, and includes the song “Kentucky, 1988” about her upbringing in Monkey’s Eyebrow and Kentucky.