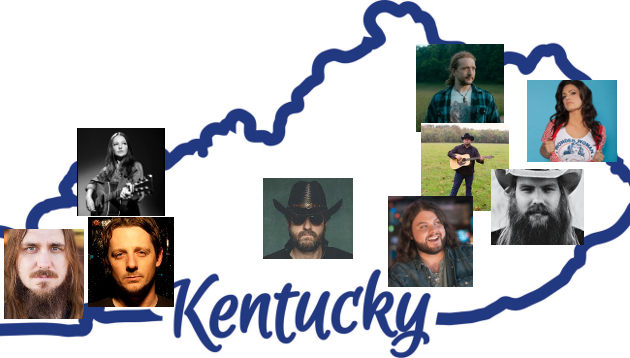 Kentucky has always been the fertile crescent of country music. From Bill Monroe and the formation of bluegrass, to countless other classic and contemporary country stars that call Kentucky home, and even to artists associated with other locales but who were born in the Bluegrass State such as Dwight Yoakam, Kentucky has been churning out incredible country music talent for generations.

It just happens to be that lately it has kicked its output into overdrive, and more than any other state at the moment, it’s Kentucky’s sons and daughters fueling the country music insurgency turning the mainstream on its head, opening up the music in ways we haven’t seen since the Outlaw era, challenging the status quo, and in some cases finding unparalleled success rarely seen for artists with an independent spirit.

With all deference to Texas and Red Dirt, which is the largest and most self-contained regional musical scene arguably in all of music—and is offering one of the few viable alternatives to Nashville’s Music Row—it is Kentucky right now that is setting the pace in the way it is shaking up the entire industry. There is a big upsurge in country music talent emanating from the two coasts, including L.A’s Sam Outlaw, Jaime Wyatt, and A.J. Hobbs, and even a surprising wellspring of talent in New York that has seen the emergence of Zephaniah Ohora and The Brother Brothers. But it is Kentucky that is birthing the talent that is taking independent music to the apex of commercial success and critical acclaim.

Of course there are the obvious names of country music Kentuckians such as Chris Stapleton, who isn’t just selling more records than anyone in country at the moment, he’s lapping the field many times over. Stapleton is up there in the stratosphere of sales with names such as Taylor Swift and Ed Sheeran. Born in Lexington, but raised in the tiny coal town of Staffordsville, Stapleton’s father and family were all coal miners. Now he’s embedded those hardscrabble experiences into songs that are finding a massive audience despite the deafness of country radio. Chris Stapleton’s peers are paying attention however, and who would have ever thought a few years ago that a scruffy Kentuckian without a single significant radio hit would be the three-time reigning CMA Male Vocalist of the Year?

And there is Sturgill Simpson, who inspired Chris Stapleton to work with producer Dave Cobb and cut a record live, resulting in Stapleton’s overwhelming success and positive reception. Sturgill Simpson is the true embodiment of the country music insurgent, mouthing off whenever it’s needed (and maybe sometimes even when it isn’t), and embodying the anger of the disenfranchised country music fan, and a forward thinking approach to country music. Sturgill’s grandfather lived in Kentucky coal mining camps, listening to the Grand Ole Opry on Saturday nights on the camp radio. Though the music of Sturgill’s last record veered somewhat away from country—and to hear him speak himself about it, it’s probably not likely his next album will be very country either—his work has already gone far to helping right the country music ship, and the reverberations of Sturgill’s efforts are still resonating throughout the genre, and inspiring a new generation of country insurgents to take up the fight.

Speaking of such, one of the most remarkable things about this Kentucky-fried country music insurgency is the yawning breadth it has enjoyed across a diverse cross section of backgrounds and influences. Tyler Childers from the coal regions of Lawrence County, Kentucky has picked up the mantle that Sturgill Simpson vacated as a roosty and gritty hard country revivalist, and run with it. His future is as bright as anyone’s in the industry, and with a direct endorsement from Sturgill Simpson as one of the producers on the well-received 2017 release Purgatory.

This Kentucky wave isn’t exclusively a male-dominated affair either. In fact a slew of women right now are in the thick of speaking out about the ills of Nashville and championing the independent approach to country music. Songwriter and performer Angaleena Presley from the incredibly-tiny Appalachian mining town of Beauty, Kentucky, released a record in 2017 called Wrangled that as the Pistol Annies member put it bluntly, is her “fuck it” record. Speaking directly to the way Music Row wrangles artists, and specifically women, and challenging the list-tastic “coutrier than thou” flavor of the country bros, it was short listed on many critic’s end-of-year tallies as one of 2017’s best.

The same went for Kelsey Waldon‘s 2016 effort, I’ve Got A Way. A slyly thematic work, the record was all about Waldon asserting her own identity and freedom in a world that constantly is attempting to reshape and sway her towards its own image and desires. Waldon is originally from Monkey’s Eyebrow, Kentucky. Yes, it’s a real place in the western part of the state, near the Ohio River. Unlike many of her Kentucky compadres, Kelsey’s family farmed tobacco and raised cattle as opposed to working the coal mines, but the true struggle and stories of America’s rural heartland still drip from her songs.

Even the Wheeler Walker Jr. phenomenon has its roots in Kentucky, since that’s where comedian Ben Hoffman is originally from. Though certainly not for everyone, his foul-mouthed persona has honed in on the acrimony that exists from the pop direction of country, and made it into a creative platform. And once again it was another Kentuckian in Sturgill Simpson who opened doors for Walker by introducing him to producer Dave Cobb.

And that’s really just the start. One of the dangers of trying to list off all of Kentucky’s country music insurgents is you’re probably going to miss a few since they’re so numerous. Justin Wells, who once fronted the Southern rock band Fifth on the Floor and won Saving Country Music’s Song of the Year in 2016, is from Lexington, Kentucky. Dillon Carmichael is one of the hottest names to watch right now after the release of his song “Old Songs Like That” and the revelation that his upcoming debut is being produced by Dave Cobb. Carmichael is from the tiny town of Burgin, Kentucky. And Kyle Fields from Greenup, KY on the Ohio River just released a new album called Hillbilly Poetry. Jeremy Pinnell‘s Ties of Blood and Affection is another release that has folks talking beyond the Bluegrass State.

And there’s even more artists beyond that. JD Wilkes of Th’ Legendary Shack Shakers has long been an inspiration for Kentucky artists to hold tight to the roots of the region, and to challenge the traditional business model of music. Along with being an encyclopedia of the region’s influences, he gave Sturgill Simpson his first big break on stage.

Even as depressed areas in the Midwest and Upper Midwest rebound, Kentucky and its reliance on the coal economy has put the region through incredible hardships like it hasn’t seen for generations. For all the adversity, it has awoken an independent spirit, and resolute doggedness in a new generation of country music artists who when they arrive in Nashville, do so with a stiff upper lip, and an unparalleled determination one needs to hold on to your vision, and persevere in an industry bound and determined to reshape you. It’s being themselves—Kentuckians—that has made them the heart, the face, and the sound of the current country music insurgency.