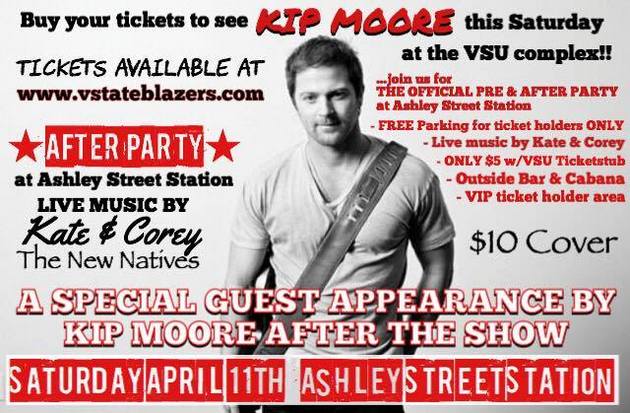 On Saturday, April 11th, “Somethin’ ‘Bout A Truck” singer Kip Moore played The Complex at Valdosta State University in Georgia to what by all accounts was a satisfied and appreciative crowd. After the show, some Kip Moore fans gathered at a local bar called the Ashley Street Station where Kip Moore had an agreement to make an appearance at the official afterparty proceeding the concert. Kip wasn’t scheduled to play, but simply to show up, and the bar was charging a $10 cover for the chance to see Kip and listen to some local bands.

But Kip Moore never showed up. Fans waited and waited at the Ashley Street Station, but no Kip. Making matters worse, Moore was then spotted in another local bar in Valdosta, drinking with patrons and snapping selfies, stimulating angry fans to post messages online, and the Valdosta’s Happenings to publish an angry letter calling Kip Moore an “asshole.”

This solicited s strong response from Kip, who insisted he wasn’t a part of any agreement to make an appearance at the Ashley Street Station.

I’m hearing a lot of noise about some after party that I was suppose to attend at Ashley street something bar in Valdosta last night..let me explain something to the people that feel the need to bitch about this. First and foremost is I show up to play the show period. That’s my focus. I give everything I got night after night. I never go through the motions during a show regardless of the energy of the crowd or how tired I am. I make sure I do my best to give you my best because that’s what you came for.

Now on the topic of this bar. It amazes me people can’t read between the lines on some things. A lot of towns we play has a bar that’ll spread the word that we are coming after the show. It happens all the time. This is the first time I have any knowledge that I was “suppose” to attend some after party. What probably happened was in the middle of getting ready for my show someone asked me would you like to go out to whatever bar you guys claim I was “suppose” to be at. I probably said “I might” cause I know to never say “yes” to these things because sometimes I’m too wiped after the show. I don’t recall that but it’s a possibility.

And for the record the only bar that I remember telling I “may” come to was blue water. I hung out with fans took pics with anyone that asked and had a good time meeting new people and catching up with friends I grew up with. I have def learned you can’t please everyone..people can’t wait to put their sticky little fingers on those typing keys to slander somebody these days for no real reason and that simply sucks. normally I wouldn’t even respond to such ridiculous shit BUT being that this show was at my old college I am. And to be honest, if me not coming to a bar to take pics after playing the show (where my focus was and gave you everything i had on that stage) makes you not like me anymore and not want to listen to my music then goodbye”¦now to all the fans that enjoyed the show and didn’t bitch about this petty silly ass ridiculous situation thank you for last night.

I had a blast and appreciate all the support. If we would all learn to chill and let the small stuff roll off of us what a beautiful world it would be. See y’all on the road

So that solves it, right? This was all a misunderstanding with a bar maybe a little to eager to declare themselves the official afterparty and promise patrons a Kip Moore appearance. In fact the patrons and bar that expected Kip Moore to show up were the true assholes.

Well wrong. Kip Moore in fact did have an agreement to make the appearance between himself and the Valdosta State University, and Kip was the one who broke the covenant with fans, VSU, and the Ashley Street Station by skipping out and hanging out at another bar owned by a buddy of his, and posting his presumptive and accusatory letter on his Facebook page. This all came out subsequently in a post by the Ashley Street Station.

I apologize for all who waited, traveled, ect to see Kip at Ashley Street Station last night… I (owner) worked very hard promoting, rearranged large scheduling issues, travelled from Athens Ga & our 2nd location, had many other people & band members rearrange their schedules as well, & spent time away from my significant other, my family, and my 4month old (which I don’t see cause I’m out of town) to help promote his VSU show…

THIS WAS AN AGREEMENT BETWEEN VALDOSTA STATE UNIVERSITY & KIP MOORES PEOPLE for him to be at Ashley Street Station afterwards.. we were NOT under contract with him but VSU was..VSU will handle this appropriately and that’s all we have to do with it
I will say however, Kip & his manager were fully aware of the agreement which I know personally since I spoke to both yesterday myself

I was approached by VSU with this last week, we were glad to help support local music as we have done consistently over the last 3 years and will always do. With that being said we will let VSU handle this from here on out and once again I apologize to all involved including my staff that worked tirelessly all week!!

So what does Kip Moore do? He did take “somewhat” responsibility for skipping out on the appearance in a subsequent post on Facebook, even though it was all the fault of Kip and his management for missing the contracted appearance. He then he decided to take exception with the people who had a problem with the incident, sarcastically calling them “true American badasses.”

I stand somewhat corrected..I’m just now learning the details of the arrangements made by my team and the owner of Ashley Street in Valdosta on sat night. I Was never suppose to play but suppose to come by and hang with people from the show. I went to a place where my buddy worked and it was never communicated to me that people were waiting at the other bar. I apologize to anyone involved with the miscommunication and to any fans that waited on us. To the tough guys talking noise that don’t know what really happened I say congrats on being tough. You’re true American bad asses

And that is it. An apology, somewhat, but no promises to make it up to folks in the future, a possible lie about not knowing about the appearance (if we believe the Ashley Street owner), and no true sense of contriteness after a situation that seems to be all the fault of him and his management.

Communication breakdowns and mistakes happen with every human. It’s how we handle them that is the measure of a man.

Kip Moore is originally from Tifton, GA, near Valdosta, and made his first ever appearance at Valdosta’s Mellow Mushroom restaurant.

***UPDATE: Kip Moore has erased both his Facebook posts.