Kody West Is Anything But “Green” On Debut Album

In many sectors, the future of country music is rife with uncertainty as you’re forced to squint hard at the current tiers of top stars and up-and-comers and wonder where this all will lead us years down the road. But when it comes to the Texas country scene, there is no cause for concern for who’s gonna fill the shoes and stand on the shoulders of all the greats that came before. If there is any problems, perhaps it’s there aren’t enough pairs of shoes to go around for all the new acts sprouting up.

With a healthy farm system to find and develop talent, a great environment where established artists are more than happy to bestow guidance and opportunities to younger artists just as they were done by the established stars before them, songwriting opportunities that foster collaboration between the separate recruiting classes, and even the infrastructure of regional radio and booking/management agencies to get artists the support they need, there is no cause for concern where the future of Texas and Red Dirt music will come from. Take all the ills you know about how the Music Row system develops talent, and the opposite seems to be the case in Texas.

Where it seemed like only a few years ago it was the Randy Rogers Band and Wade Bowen being considered the newcomers in Texas country, then it was the Turnpike Troubadours and William Clark Green, now there is an entirely new rookie class with Flatland Cavalry, the rambunctious Koe Wetzel, and newcomer Kody West. Yes, that’s a lot of K’s for first names, and this is one of many indications that Millennials who grew up listening to the Turnpike Troubadours and Cross Canadian Ragweed are now trying their own hand at the music, and succeeding.

Specifically, Kody West was a Denton, Texas kid who started out by working as a tour manager for Dalton Domino and the Front Porch Family, playing fill-in shows and opening slots around the Dallas/Ft. Worth area whenever he could, all while watching and learning the business, and developing his own chops. 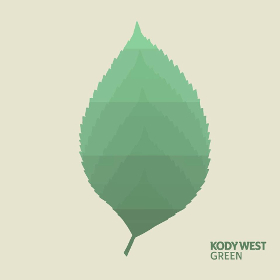 After first releasing an EP in early 2016, Kody West formed his own full-time band, and started touring regionally. Now he’s got show dates up and down the calendar and all across Texas as he tours behind his debut album, Green. The title of this record is Kody West fessing up to his 21-year-old status as an up-and-coming Texas singer and songwriter, and isn’t it refreshing to see a young performer acknowledging their naivete as opposed to puffing their chest out and telling anyone in their way they’re old and part of the problem?

Yet listening to the songwriting and the developed sound on Green, this record feels anything but freshmen. It has a maturity in the subject matter well beyond Kody’s 21 years, and beyond the output of many artists who are nearly twice his age. Isn’t that the beauty of self-awareness. When you’re able to see yourself as the rest of the world does, and when you look up as opposed to look down at the elders and heroes you’re surrounded by and came before you, all of a sudden a lack of real-world experience isn’t as much of a burden, it can even be an asset. That’s how you can have a kid from Texas who just turned old enough to drink singing songs that are more thought-provoking than Bro-Country acts pushing 40.

Human beings tend to be on either one of two paths in life: Either their maturation process stops at some point in high school or college or maybe sometime before, and they live the rest of their lives in perpetual nostalgia for their glory days, or they spend their whole lives working to grow as people, like the green chutes in the spring that reach for the sky and never stop until they fulfill their full potential. Kody West’s songs are for those second kind of people—those who see their own faults before they see the faults of others, those blessed with the self-reflective gene and a desire for improvement and understanding in life’s journey.

At the same time, Green is far from preachy, heady, it’s certainly not boring, nor does it ignore the joys of young adulthood. It’s quite sensible from a sonic standpoint, finding that common, but enthralling mix of country roots and rock sensibilities that is at the heart of all great Texas country music, and gives it a warmth that is easy to enjoy.

There is still room for improvement in the songwriting, and if Kody West is going to separate himself from the herd of Turnpike Troubadours/Randy Rogers Band soundalikes, he needs to find out what his signature tone is. Green is well-produced without a hiccup by Ben Hussey and Josh Serrato, but it could have used some fiddle perhaps, or just some other wrinkle to make the music more unique. But isn’t that what’s great about discovering a young artist. You know the foundation is there. Now you get to sit back and watch them sprout, blossom, succeed, and eventually drop their own seeds to the future contributors to Texas country to sprout from.