Trigger Down with Pop Country 50 Comments 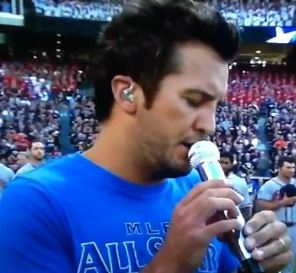 Pop country’s official pretty boy Luke Bryan got caught red handed Tuesday night (7-10-12) at the Major League All-Star Game gaining advantage from a substance applied on his hand like Gaylord Perry dressing a spitball. Yes, Luke Bryan had plenty of time for multiple applications of his chemical tan and to have a team of dwarves squeeze him into his designer skinny jeans, but couldn’t be bothered to actually memorize the words to our National Anthem.

As he stood in the middle of Kauffman Stadium, holding the microphone in a very curious, gingerly manner, he could clearly be witnessed receiving aid from words written on his southpaw. Some theorists have surmised that he was actually checking his watch to time the song’s climax with the stealth bomber flyover, but both times when he peers towards his hand he clearly turns the face of his watch away from him (the direction of the face and buckle of the watch are clearly visible). So yeah, this theory is a slow dribbler that rolls foul. And if his intention was to time the song with the flyover just right, he whiffed here too because the bomber clearly flew over before the song was over.

Aside from not knowing the words to a song most third graders could scratch out with their Husky pencils by heart, his performance was actually next to flawless. But once again when country is given the opportunity to showcase itself on a national scale, to a national audience, it strikes out.

Luke Bryan through his Twitter account admitted writing down a “few key words” on his hand and apologized to anyone offended.

Morning everyone. I really wanna explain the national anthem performance from last night…I had a few keys words written down to insure myself that I wouldn’t mess up. I just wanted to do my best. I promise it was from the heart…If I offended anyone with my approach I sincerely apologize. Anytime I sing the anthem it is an honor and my heart beats out of my chest…I did check my watch because I knew the stealth bomber would fly over 2 minutes in and I knew a started a little late…Being a part of the all star game was amazing and I look forward to the next time I can perform the anthem. Thanks y’all. Love ya.