Did you ever wonder what it would sound like if a performing artist with absolutely no qualms or reservations spread their arms wide in a succumbing posture and completely forfeited their Will to a record label saying, “Okay Music Row, do your worst! I’ll do anything. Mold me, shape me, I’m your monkey. Make me a star! “? We’ll that is exactly what you get with Luke Bryan and his gawd awful album Tailgates and Tanlines.

I will stop short of saying this is the worst country music album of all time. I still reserve that dubious distinction for Justin Moore’s Outlaws Like Me, but Tailgates and Tanlines starts off with possibly the worst song in the annals of country music in the booty anthem “Country Girl (Shake It For Me)”. Positively nothing more than a pop dance song with a banjo, Luke Bryan commands country girls to “shake it” for the birds, the bees, for the crickets and the critters and the catfish swimming down deep in the creek, for the gerbils crawling way up his rectum to massage his prostate… oh wait, he left that line out, but you get the point. This song is like a frozen sledge hammer to the balls of anybody who has any sort of musical taste or dignity.

The most current single from the album “Drunk On You” is an anthem for culturally-repressed suburban boys to vomit into the floorboards of their Scions to. It starts off like an Enya sleep induction CD, and then launches into lyrics like:“Girl you make my speakers go “boom boom’…that kinda thing makes a man go ‘uh hoom.'” I have it on good authority that Luke Bryan co-wrote this song with the gay teletubby in a BMI cubicle on Music Row before heading down to the local high school to hand out free prophylactics. I know, weird story, but 100% true. 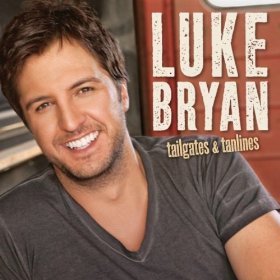 That leads into “Too Damn Young” about awkward adolescent sex. She was young. He was dumb. It was summer. Fill in the blank. I can’t wait for the follow up to this song on his next album, “I’m Only 17 But The State Is Already Garnishing My Dairy Queen Wages for Back Child Support”; purportedly it’s a duet with Lionel Ritchie.

Next up is “I Don’t Want This Night To End”, and yet again we have a song about a girl, and booze, and dancing to the radio and getting it on. This whole album is a country cliche to begin with, but in a brilliant stroke of idiocracy, it has the profound gymnastic ability to create it’s own universe of cliches and worn out themes by only the 5th track.

What else do we have on this stupid album. Oh! “I Know You’re Gonna Be There” is an absolute riot, a jilted doucher instruction manual of how to make your stupid ex-girlfriend jealous by feigning interest in another woman. “Muckalee Creek Water” is the ultra-charged laundry list song of the album that talks about Luke Bryan hiding moonshine bottles in cypress stumps, when we all know damn well this V-neck-wearing priss would eek at the sight of a dead cricket in his record label’s accounting office.

“Kiss Tomorrow Goodbye” is actually not a bad song, but of course that means radio won’t touch it, and my Auto-tune radar was going wild in the way the tone changes have such sharp edges.

The thing is with Luke Bryan and a lot of these manufactured pop stars, they did not get here by complete accident. Many of them had to work hard at some point, and at least had to have moderate talents to get them to this level. Luke Bryan is not a bad singer, and has a unique enough voice to do something good with. But instead he chose to use it for the forces of evil, shlogging out pop country fop instead of something with substance and heart.

Listen Luke, seriously. Man to metrosexual country douche. Don’t let Music Row make you into their musical monkey. You’re better than this man. Going platinum with an album like Tailgates & Tanlines isn’t success, it is a colossal failure of your human spirit, and the more the album succeeds, the more you’ve failed. You’re not an artist right now, you’re an automaton. Break out man, be yourself, show some self respect, dig down deep and find what you have to say and say it.

And even if that means you lose all your shiny expensive things and you have to go back to working some shitty job, if someday your in some lonely coffee shop singing your own songs, ones you wrote from the heart, and you have one moment that touches one other person, one soul, and it makes one bit of difference in that person’s life, that will be worth way more than all the riches this album has brought you. Trust me.

Two guns down on Tailgates and Tanlines.