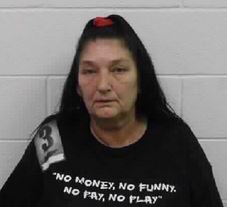 Mamie White, sister of the “Dancing Outlaw” Jesco White, and one of the stars of the controversial documentary The Wild & Wonderful Whites of West Virginia, has been arrested once again.

According to the Boone County Sheriff’s Office, Mamie Savannah Warner recently was caught trying to sell drugs at a Tudors Biscuit World in Boone County while two police officers were having lunch at the location. This resulted in Mamie being found guilty for felony delivery of a controlled substance, and she was placed on 90 days of home confinement. When she violated the home confinement order on Thursday, July, 3rd, police arrested her and booked her into South Western Regional Jail in Holden, West Virginia.

White was also arrested on November 9th of 2013 for driving under the influence of alcohol (DUI), possession with intent to deliver a controlled substance, and assault and battery of a police officer with a weapon.

Mamie had a very small appearance in the original The Dancing Outlaw movie that was released through PBS in 1991 that began the cultural fascination with the White family of West Virginia, and eventually landed her brother Jesco appearances on the TV show Rosanne and other high profile roles. In 2009”²s The Wild & Wonderful Whites of West Virginia, Mamie was arguably the focal point of the film as the family’s matriarch after the passing of her mother, Bertie Mae White. Mamie used to act as de facto manager and liason for her brother Jesco.

The Wild & Wonderful Whites of West Virginia explicitly depicts Mamie White, and other members of the White family abusing and selling prescription drugs and other illegal substances. Since the release of the film, Mamie and other White Family members have distanced from the depictions, and claimed they were taken advantage of by the film. Mamie told the Coal Valley News, “I’m not happy with the scenes of drug use and neither is Jesco”¦We haven’t gotten enough from Johnny Knoxville to amount to anything.”

Jesco White was also arrested near the release of Wild & Wonderful Whites in 2009, but all the charges were later dropped.