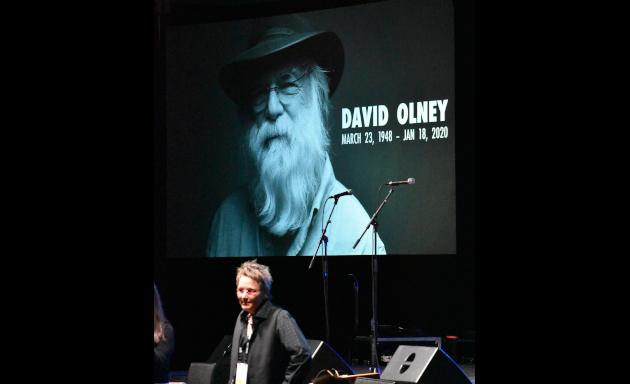 To many, David Olney is the songwriter who lost consciousness mid performance at the 30A Songwriters Festival last weekend and passed away in a poetic manner. Some knew of David before hearing the compelling story of a songwriter dying while doing what he loved best, and many didn’t. But to the folk and songwriting community, David Olney was a pillar of the craft, and a close friend.

David Olney was scheduled to perform at this week’s Folk Alliance International conference in New Orleans Thursday afternoon (1-23) on the festival’s biggest stage in the grand ballroom, and instead of filling his performance slot with someone else, they left the slot open for folks to remember Olney, and what a master of songwriting he was. Close friend Mary Gauthier, as well as other performers, songwriters, DJs, and industry professionals, all gathered to remember David, some in song, and some in story.

Gauthier insisted in not taking the stage or amplifying the remembrance, and instead compelled the assembled audience to group around in a circle in front of the stage for a more intimate moment. If you want to know just what David Onley meant to the songwriting community, read Gauthier’s unscripted speech below.

Along with her words, Mary Gauthier performed the song “Women Across The River” with Jaimee Harris—a song that David Olney wrote for Linda Ronstadt. Songwriters and performers Irakli Gabriel and Anana Kaye, who just two weeks prior had finished a collaborative album with Olney and had traveled to Folk Alliance to perform with him, also remembered Olney and performed.

“David Olney always wanted to keep moving forward,” Irakli Gabriel told Saving Country Music after the tribute. “Some people have known him for 30 years. We only knew him for three. But if you knew David, you felt like you’d known him forever.”

Afterward Irakli Gabriel and Anana Kaye performed, more artists, DJ’s, and others stood up to share their thoughts and stories about David Olney with the crowd.

In 1993, Emmylou Harris recorded David Olney’s “Jerusalem Tomorrow.” He also co-wrote what many consider one of Emmylou’s most important songs, “Deeper Well” off her iconic 1995 record, Wrecking Ball. Linda Ronstadt, Steve Earle, Steve Young, Del McCoury, Slaid Cleaves, and Laurie Lewis are some of the many artists who covered or composed songs with David Olney over his nearly 50 year songwriting career. The Providence, Rhode Island native had his own performing career as well, releasing over 20 albums spanning four decades, including with the band he helped form, “The X-Rays,” who were signed to Rounder Records, and appeared on Austin City Limits.

Mary Gauthier also announced that a more formal remembrance will be happening for David Olney in about a month, likely in Nashville.

I always called David Olney the ‘Master of Perspective’ in songwriting. He was the king of original approach. He didn’t write deeply personal songs at all. He was always in his songs, but you had to look for him. He wrote songs that were wildly original. He had a song where the dummy was talking to the ventriloquist, saying ‘Who’s the dummy now?’ He had a song from the perspective of the huckster on the mountain next to Jesus who was losing his audience to this Christ guy, wondering, ‘What’s his trick?’ He had a song written in first person from a French prostitute in 1917. He had a talking iceberg in a song called ‘Titanic.’ He was a genius …

His songs are going to live forever. And that’s the most a songwriter could ever hope for, for your children to keep on going after we’ve left this earth.