Meet Zach Bryan, The Man Behind The Viral Album “DeAnn” 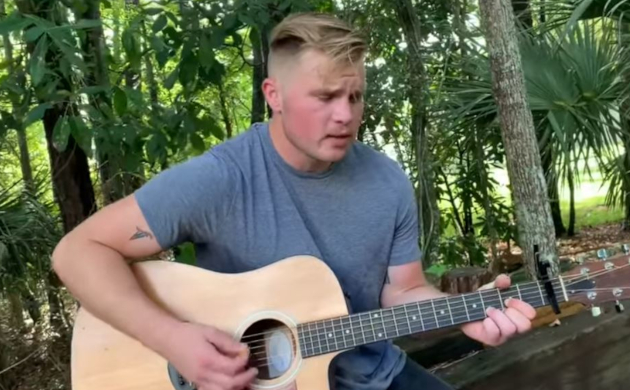 Tulsa, Oklahoma native Zach Bryan took many fans of Texas, Red Dirt, and independent country music by surprise recently when he released an album of solo acoustic recordings on August 23rd under the title DeAnn. Named after his deceased mother, and fueled by the immediately resonate nature of the songwriting, the album has blown up through streaming services, with absolutely no label, no management, and no publicist or promotional push whatsoever. Simple word of mouth has made Zach Bryan and DeAnn one of the hottest artists and titles in independent country circles at the moment.

Managers, labels, and publishing companies have been showing interest in the young man, and he says he’s been receiving queries from all over the country after the release of DeAnn. If he can attract this kind of attention with acoustic tracks and no outside help, many wonder where could this thing go from here. But the biggest question many have is, who is Zach Bryan?

“I’m active duty military. I’ve been in the Navy for six years,” the 23-year-old tells Saving Country Music. “My old man was in the Navy, my grandpa was in the Navy, my mom was in the Navy. My family’s just a Navy family (He was born in Japan while his family was on deployment, incidentally). I just got off deployment at the end of April, so it’s been very nice to be back home. I spent the summer in Florida, and it’s been a cool summer. I’m really enjoying myself. I don’t have to go back onto deployment until of October of next year, so a long time from now.”

Though Zach Bryan is off deployment at the moment, he’s still a full time active duty ordinance man for the Navy. Though he’s officially stationed in Washington State in the same region Sturgill Simpson spent time during his Navy experience, Zach Bryan is currently in Jacksonville, FL regularly working 12 hours days, five days a week. It was during some down time recently that he recorded DeAnn with some friends.

After a few of his videos received some serious traction on Twitter, Zach Bryan first worked with a guy who had a recording studio in Florida. He spent a full day recording many of his songs, but said that the situation just didn’t feel right. “It kind of frustrated me, so I kind of just forgot about it,” Bryan says. That’s when he commissioned some of his best friends—or more like they commissioned him—to record the songs of DeAnn and release them to the public.

“My boss is an old producer, and he heard about me and my music blowing up, and he’s one of my best friends. He looked at me and said, ‘Hey, do you believe in these songs?’ And I said, ‘Wholeheartedly.’ And he said, ‘Well let’s just record them.'”

So they went to Guitar Center and purchased some recording equipment, rented an Airbnb in Jacksonville, and set up a makeshift recording studio by removing the pictures on the walls and moving around the mattresses in the house. “I looked at my buddy and said, ‘Man, I don’t know if this will be worth it without a band and full tracks. We really don’t have any idea what we’re doing. And my buddy was like, ‘We’re doing this. Because I’ve heard the songs, and I know people will enjoy them.’ I didn’t believe him, honestly. I wasn’t going to do it. My friends talked me into it, and I owe them that. So we did it, and we had no idea what we were doing. We just uploaded them to one of those distribution sites, and here we are.”

Though the streaming numbers speak to the reception Zach Bryan has received, as do the dozens upon dozens of people who have latched onto his songs, DeAnn does have its detractors, including those that say his style is too similar to Tyler Childers, and that he’s too fawning over other songwriters such as Evan Felker of the Turnpike Troubadours, who Bryan wrote a tribute song to. But he’s not disappointed, or intimidated by some of the criticism he’s been receiving.

“I say thank you, because that’s what my life’s been about, and that songwriting has gotten me through my hardest stories,” he says. “I’m a songwriter. To me, it’s not about what the music sounds like, it’s the lyrics I put into it. This was not a plan of mine. Music was not on my radar. But the fact that people are criticizing me makes me feel lucky, that people care enough to criticize. That’s neat. I never thought I would be in a place where enough people had heard my music to criticize it. I feel blessed about that. Whatever people say about it, it’s okay. They’re my songs … Evan Felker and Jason Isbell. That’s where I learned to love music. And then Tyler Childers came along later, and that just changed my life. Those three songwriters right there. They really spoke to me. That’s where I got my country longing to tell stories in songs.”

“The other thing about people saying that I sound a lot like Tyler Childers, it’s kind of funny to me because every single one of those songs was written from my heart, and the album was dedicated to my mom.” Zach continues. ” I wrote half those songs five years ago (before he knew of Tyler Childers), and I wrote the other half in the last few weeks. When I was writing those songs I was writing them to myself. I was trying to get myself through some hard times, and maybe I thought they could help other people get through them as well. I put so much thought into, ‘How can I tell this story to other people where it can help them?’ The messages people are sending me about my songs, that’s the only thing that matters to me. I have all of these labels, and people calling me and telling me things. It’s amazing and cool, and I think it’s really kind, and I appreciate every single person that puts effort into talking to me. But it wasn’t about that for me from the start. And if it wasn’t for this blowing up, I would still be the same kid playing these songs to myself in the same room.”

Zach Bryan says he’s even grateful for the criticism Saving Country Music offered in the review of DeAnn. “Everyone was calling me saying ‘You retweeted that article about you needing more instruments,’ and I said, ‘I think you missed the point of the article. It was being genuine and giving me constructive criticism.'”

And nobody is more surprised about how DeAnn was received than Zach Bryan himself. “It was just as much of a shock to us as it was everyone else. And the love that I’ve received from releasing this music has honestly made my entire life. I cannot believe there’s so many kind people out there, and people want to listen to songs that mean so much to me. I think it’s really cool, and shows a lot about the human spirit and who people are. It’s really cool that a kid like me that who’d been listening to radio country music and be like, ‘What is happening?’ And then to release songs like mine and see that people can still relate to lyrics, and just a guitar and a guy, it’s an amazing thing to me. I cannot thank people enough. They’re amazing.”

Zach Bryan says the biggest challenge has been all the attention and communication he’s received. Though Hurricane Dorian hovering off the coast of Florida has eased some of his daily Naval obligations over the last few days, he’s still been overwhelmed with support and inquiries.

“I feel a little bad because I’m an empathetic guy, so when people reach out to me, I feel like I have to answer every single person—not in a negative way. I was never meant to be in the spotlight, because I feel like every single person deserves an answer and explanation. That’s the only part of it that’s been difficult, is the grand scale of people trying to communicate with me, but I can’t talk to every single person and tell them how much I appreciate them listening. I’ve never been in this situation, and I’m aware of that. I’m learning as I go how to handle this thing, and that’s okay because that’s what life’s about. It’s been an amazing experience, and I can’t be blessed enough, and I think it’s cool that people are listening to begin with.”

The biggest question many listeners have is where this thing might go from here?

“I’m in the Navy and I love being in the Navy,” Zach explains. “I think I might just keep being in the Navy and writing songs, and that’s about it—keep writing music that people might like. People have asked me to go on these tours and these mini tours in Texas, and I just can’t. It makes me feel terrible and I wish I could, but God has a way of doing things, and I think he’s doing it right.”

But the 23-year-old says he’s still open to pursuing music and releasing more songs as best he can, and now with the success of DeAnn, he feels obligated to.

“There are thousands of kids sitting in their rooms right now playing guitars that would beg to be in the position that I’m in right now. That’s out of no arrogance. I feel responsible and an obligation to write more music, and pursue it as well as I possibly can just for those kids. It would be wrong not to chase it, if the songs can get to more people with no stipulations attached, no dollar amount, nothing like that. I would really like for people to hear music they need to hear, my songs or other songs, it doesn’t matter.”